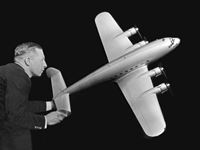 The FC.3, or Stage II development, was essentially the FC.2 fitted with a pair of Armstrong Siddeley Double Mamba turboprops operating through a common gearbox and driving contra-rotating propellers. Fairey had played a major part in the development of the Double Mamba, and the powerplant saw extensive service in Fairey’s Gannet anti-submarine aircraft, which made its first flight in September 1949. 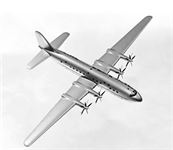 The FC.2’s proposed passenger cabin layout had rows of twin seats on the starboard side, with singles on the port side, separated by an offset aisle. The Merlin T.24 was a specialised version of the two-speed supercharged Mk 24, developed for improved service life for use with RAF Transport Command’s Lancasters, Lancastrians and Yorks.