Hinaidi II K1075 of 99 Sqn up from RAF Upper Heyford in May 1933. The squadron operated the type from October 1929 until March 1934 and Hyderabads from December 1925 until January 1931.
A STEEP BANK: The earth is not really standing up on end. This "Hinaidi" was in a steep bank when our photographer took it from another machine above.

J9126, the prototype Handley Page Clive bomber-transport. It was first flown on February 18, 1928 and appeared at that year’s RAF Display at Hendon. Later it was registered G-EBYX, sold to Alan Cobham and named Youth of Australia.

A splendid view of a 503 County of Lincoln Special Reserve Squadron Hinaidi probably taken at RAF Waddington. Note the squadron crest on the nose.

Hyderabads of 99 Sqn from RAF Upper Heyford en route to the RAF Display, held at RAF Hendon on June 30, 1928.

SINISTER: A Handley Page "Hinaidi" night bomber with two Bristol "Jupiter" engines, belonging to No. 99 (Bomber) Squadron at Upper Heyford.
Metal Hinaidi Mk II K1075 of 99 Sqn. This aircraft was struck off RAF charge in January 1935 after four years’ service with the squadron. 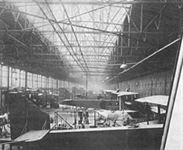 Hyderabad J7748, a former 99 Sqn aircraft, pictured in December 1926 at the time it was being used on autopilot tests. It was returned to the squadron in March 1927.

10 Sqn Hinaidis with K1919 in the foreground. They were delivered during the first half of 1931 during the period that the squadron moved from Upper Heyford to Boscombe Down.

A somewhat crumpled Hinaidi - location and date of its sudden arrival unknown.