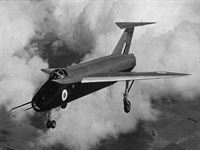 Air-to-air views of the Short S.B.5 in its original form, taken by Charles E. Brown. WG768 is seen with the 50° swept wing and full-span leading-edge droop of 20°. The incidence of the delta-shaped tailplane could be altered in flight through a 20° arc. The S.B.5 was powered by a single Rolls-Royce Derwent 8 of 3,500lb static thrust (at sea level).

WG768 in dark blue or black gloss finish and bearing the number 28, as flown during its two-year stint with the ETPS. This photograph is dated September 1969.

Still with the 60° swept wing, WG768 is seen with the fixed leading-edge wing root flaps. These were movable on the first P.1A, but were not adopted for the Lightning.

Two views of WG768 airborne with the 69° swept wing. Painted gloss blue, it took to the air in this form for the first time on October 18, 1960, in the hands of Denis Tayler of the RAE Aero Flight.

Three-view of WG768 in the condition prevailing at December 1952, the time of its maiden flight. The wing-sweep is 50°, with a full-span 20° leading-edge droop and the tailplane in the fin-top position.

Left side view, and right plan view of the 60°- sweep version after October 1953’s modification to incorporate the fixed leading-edge flap and 20° droop. The tailplane is in the low position, where it remained thereafter.

A three-view showing the September 1960 appearance, with 69° wing-sweep in “clean” configuration and leading-edge notch. The blue finish remained until the aircraft joined the ETPS.
Undercarriages are in “flying attitude” and not under compression. Rakes are shown as applicable to the wing-sweep / tailplane position combination of each illustration.