The prototype XB-35 modified with four bladed propellers replacing the earlier contra-rotating ones. 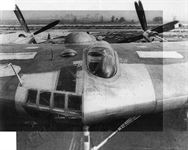 Остекление кабины экипажа
The XB-35 pilot's bubble canopy on the right, with Northrop's structural chief, A. M. Schwartz, standing inside. The greenhouse structure marks the co-pilot and bombardier's positions. The crew nacelle, behind, was large enough to permit a tall man to walk without stooping and extended aft to the conical tail.

Nine YB-35s awaiting conversion to jet configuration at the Northrop plant. Only one conversion had been completed when the programme was cancelled in November 1949. This photograph demonstrates the economic use of space when parked.

The ultimate Northrop flying wing design, the YRB-49A, takes off on its maiden flight. May 4, 1950.
The sole YRB-49A, identified by the two underslung engines and the large ventral equipment bay at the rear of the central nacelle.

One of the two YR-49 s taking off, showing the large diameter wheels to advantage.

Another view of a YB-49, looking strangely alien to this planet and more in keeping with the moonlike terrain it is flying over, actually the Californian desert. 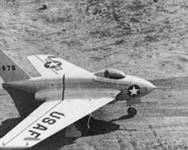