Премьерный показ XFY-1 "Пого" на земле 4 ноября 1954г.
Convair's XFY-1 shortly after roll-out, with complete lower fin.
The fruit of US Navy studies into convoy protection carried out between 1947 and 1950, the Convair XFY-1 and its Lockheed rival were both ordered in March 1951. Like its XFV-1 counterpart, the Convair used the massive 5.500 eshp Allison XT40-A-6 and was built to the same exacting pre-production fighter standards. While the Convair machine did not make its first flight until 1 August 1954, Convair's Project Pilot, James F. 'Skeets' Coleman, did ultimately manage a number of transitional flights made from a standing start. The fact that flying this 'tail sitter' straight up off the ground and back down, while virtually reclining on your back with little outside visible cueing, called for a certain degree of intestinal fortitude was confirmed by the award of the coveted Harmon Trophy to 'Skeets' Coleman in 1956. The sole XFY-1 Bu Aer 138648 had an estimated top level speed of 610mph at 15.000 feet

Convair's "Pogo" climbs straight up from the Brown Naval Auxiliary Air Station near San Diego, California. Note the wing tip pods and the absence of the ventral fin tip.

Stability and control problems were investigated with models, NACA testing the XFY-1 at their Langley Laboratory.

The XFV-1 Salmon half-elevated on its trailer. It never achieved a "straight-up" take off.

A rare photograph of the XFV-1 Salmon airborne. It is seen about 6ft off the runway at Burbank, California, during its first free flight.

Lockheed’s XFV-1 during taxying trials on its horizontal undercarriage.

The Salmon fresh from the factory, in its VTOL stance. 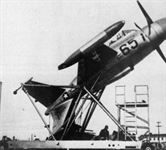 Side view of the XFV-1 on its transporter/elevator.

Stability and control problems were investigated with models, NACA testing the XFV-1 at their Ames Aeronautical Laboratory