THE SINCEREST FORM OF FLATTERY: Remembering the success with which D.L.H. have operated their regular night mail service between Berlin and Croydon, it is not surprising that British Airways have acquired two Junkers Ju. 52 machines for their Continental night mail. These were originally ordered by A. B. Aerotransport and have P. and W. Wasp engines with Hamilton v.p. airscrews - in place of the more normal B.M.W. Hornets. The first British Ju. 52 is seen here taxying out at Gatwick for its initial test flight with Mr. Campbell-Orde, the company's operational manager, on board.
The Ju 52/3m was no stranger to operations in the UK, three examples - G-AERU, G-AERX and G-AFAP - having been operated by British Airways before the Second World War. This example, G-AERU, was named Juno; its sister aircraft, G-AERX, was named Jupiter, which would become the type’s class name in BEA service.

Another of British Airways' Electras, G-AEPR, about to depart Croydon on the high-frequency, 90-minute Paris service in July 1937.

Lockheed 10A Electra G-AEPP and a sister ship being erected at Eastleigh after shipment from Burbank, USA.

Lockheed 14 G-AFGN, the actual aircraft used by Neville Chamberlain for the Hitler appeasement flights to Munich and Godesburg. 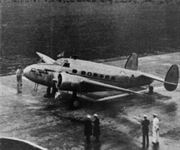 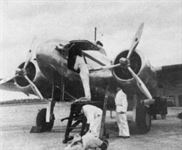 G-AFMO was badly damaged when it overshot while landing at Heston in January 1940.