By the mid-1930s the level of comfort in American monoplane designs like the Douglas Sleeper Transport, forerunner of the world-beating DC-3, was light-years ahead of the spartan accommodation of Imperial’s landplanes. These two DST interior photographs show how the day configuration converted into overnight bedding.

HANDED OVER: The Armstrong-Whitworth Ensign has now been delivered to Imperial Airways. Flight’s chief photographer, who secured the picture here, remarks that coming up alongside the vast length of Ensign is suggestive of overtaking an express train. Nose to tail, she measures 114 ft.
Almost twice the size of its Atalanta predecessor, the Armstrong Whitworth AW.27 Ensign made ts first flight on January 24, 1938. Capable of accommodating up to 27 passengers, the type incorporated a retractable undercarriage and was certainly a step in the right direction for Imperial in terms of modernising its equipment.

The 20-passenger Armstrong Whitworth Argosy trimotor was introduced into Imperial service in August 1926, and flew the first of the airline’s “Silver Wing” lunch services to Paris the following May. It was later used on European and African services, but within a few years it had been overtaken in design terms by fast, sleek monoplanes designed and built in the USA.

The Douglas DC-2 represented the state of the art when it was introduced into European service by Dutch national airline KLM in the summer of 1934. The sleek 14-passenger monoplane had made its first flight on May 11 that year, the same month that Imperial put the Short Scylla biplane into service on its European routes.

With its slender, elegantly curving fuselage, shapely wings and extremely closely cowled streamlined Gipsy Twelve engines, the de Havilland D.H.91 Albatross was the very model of modernity when it entered Imperial Airways service in late 1938. All seven examples were transferred to the newly-minted BOAC in September 1940. 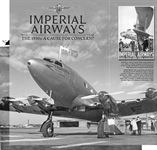 The supremely graceful de Havilland D.H.91 Albatross was a shining symbol of British progress in airliner design during the 1930s - but the type suffered from structural problems and only seven were built. This example, G-AFDI Frobisher, awaits its next flight at Croydon in November 1938.

Pre-war shot of Short S.23 Empire flying-boat G-ADUW Castor, which flew the first leg of the journey, with an Imperial Airways boarding launch alongside.
Short S.23 C-Class Empire Flying Boat G-ADUW Castor flies the flag for Imperial after its introduction into service in January 1937. The following month Imperial’s C-Class 'boats began regular services on the Empire routes from Hythe, the S.23s representing the pinnacle of intercontinental flight at the time

Based on original design documents held in the Royal Aero Club Trust archive, this general arrangement drawing of the unbuilt Blackburn C.A.15D shows its Stieger Monospar wing of 82ft (25m) span and its retractable undercarriage - both features that distinguished it from the built and flown C.A.15C monoplane and biplanes.

The fourth Armstrong Whitworth AW.XV Atalanta, G-ABTI, during a stop on its Nairobi-Cape Town route for Imperial in 1933. That year the type also began services on the Karachi-Singapore sector of the joint Imperial/Qantas route connecting the UK and Australia. In total eight Atalantas were built.

The golden age of airline flying - or was it? This glamorous group beside a Short Scylla bound for Paris may think so, but was Imperial Airways’ fleet fit for purpose?

A classic Imperial Airways poster of the 1930s, in which elegant travellers arrive at their exotic destination aboard a gleaming flag-flying four-engined Short Scylla.

The interior of a P.71A with a seven-passenger layout; the type could be configured to accommodate up to 14 passengers in a high-density layout.

An impression of the Airspeed AS.35, based on the manufacturer’s Drawing No 3501003 of 1934 for a “Small Four Engine Airliner”, held within the Royal Aero Club Trust archive. The twin-tail high-wing monoplane was to be powered by a quartet of 205 h.p. de Havilland Gipsy Six II engines.

The GAL.29 was the first of a number of ambitious airliner designs the company produced over the next couple of years as it sought to expand. Like Airspeed, the company was engaged in acquiring expertise and design staff familiar with metal construction. Its proposed design was slightly larger and about 12 per cent heavier than the AS.35. The company had previously submitted a speculative tender for a ten-seat version of the GAL.29, from which its revised aircraft was derived; the larger, earlier design featured a different wing with bracing struts and Armstrong Siddeley Cheetah engines. As an alternative GAL also offered a modified version of its Monospar-winged ST.18 Croydon, which had first flown in 1935, and which was fitted with Bristol Mercury IX engines.

General Aircraft Ltd’s GAL.29, designed to the same Imperial Specification as Airspeed’s AS.35, was a slightly scaled-down development of a ten-passenger version, but neither was ever built. Quite why the Specification for this largely redundant type was issued at all remains unknown.