The HAL HF-24 Marut was the first jet-powered fighter of Asian origin to be put into production and enter operational service. The attractive twin-engined interceptor and ground-attack aircraft was blighted, however, by problems with its Orpheus engines - hence the co-operative efforts with Egypt to fit the E-300 engine in the type.

The first Egyptian-built HA-200B Al Kahira made its maiden flight in December 1961, the type entering service to be used for advanced flying training by the Egyptian Air Force Air Academy at Bilbeis. The HA-200B replaced the Spanish A-model’s nose-mounted machine-guns with 20mm cannon and incorporated wing hardpoints. Sixty-three aircraft of this type were built for the EAF.

The first prototype HA-300 on display at the Deutsches Museum’s Flugwerft at Oberschleissheim. After the cancellation of the HA-300 project, the Egyptians turned their attention from developing expensive indigenous aircraft designs to using regional political leverage to acquire state-of-the-art aircraft from the Soviet Union instead.

Helwan HA-300 стал настоящим многонациональным самолетом - создавался немецкими конструкторами в Испании, а затем в Египте, но так и не реализовался из-за проблем с силовой установкой.
The two HA-300 flying prototypes were extremely similar, the tell-tale differences between the two being a blade antenna aft of the cockpit on HA-300-01, missing from the second prototype, which incorporated a mass-balance on the rudder; the absence of the former and presence on the latter reveal this to be HA-300-02. 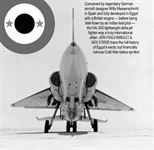 One of a series of photographs taken of the second HA-300 prototype at the Helwan works in Egypt, by German journalist and former Messerschmitt Me 163 test pilot Mano Ziegler.

The HA-23P, or HA P-300, as it is marked on the fin here, was a research glider built by Hispano at Seville to test the low-speed aerodynamic characteristics of Willy Messerschmitt’s proposed HA-300 lightweight supersonic delta-winged fighter. A removable transparent canopy was fabricated but appears not to have been fitted, and the undercarriage was non-retractable.

The HA-23P’s mid-mounted wing was of 20ft 2in (6-15m) span with an aspect ratio of 1.89:1 and an area of 215ft2 (20m2). It was built with a three-spar structure of mixed wood and metal construction and incorporated two boundary-layer fences on each wing to prevent span wise migration of the airflow.

The first prototype, without the rudder mass-balance, beside the factory at Helwan.

The first prototype, HA-300-01, with blade antenna aft of the cockpit and without rudder mass-balances, around the time of its first flight in March 1964. Production examples would have incorporated a revised air intake arrangement, with shock-cones fitted within the intake aperture.

The HA-23P glider undertook several towed flights, initially behind a motor car and then with the help of a licence-built Heinkel He 111. The nosewheel left the ground at 180km/h (112 m.p.h.) and the glider took off at 195km/h (121 m.p.h.). The towing cable was then cast off at 200-250km/h (125-155 m.p.h.). The machine was found to be unstable in flight, however, and the Spanish government decided against further development.

The fuselage of the HA-23P was constructed in two parts, the forward portion in metal and the rear section of wooden structure. The glider’s length was 33ft 6in (10-2m), which included a tailcone fitted with an anti-spin parachute. The loaded weight of the machine was 2,755lb (1,250kg) with a wing loading of 12-8lb/ft2 (62-5kg/m2).

The cockpit of the first prototype, now on display at the Deutsches Museum at Oberschleissheim near Munich. The cockpit of the diminutive fighter was “cosy”, being approximately equivalent to the UK’s Folland Gnat. The canopy hinged to starboard. 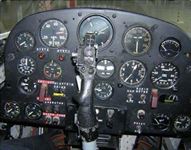 The instrument panel of the first prototype was comparatively simple for a 1960s-vintage combat jet aircraft, although it would have become more complicated as various weapons and navigation systems were added to make the type capable of operating on the Egyptian Air Force’s front line.