Using a Percival Proctor IV as a basis, Baynes co-operated with fellow designer Robert T. Youngman to create the Youngman-Baynes High-Lift Experimental Aircraft while working for Alan Muntz at Heston. The aircraft, serial VT789, also known as the Percival P.46, incorporated an extensive full-span slotted-flap system for research into short-landing performance, and made its first flight in February 1948.

The Carden-Baynes Auxiliary was inspired by Sir John Carden, who loved gliding but wanted a "self-sufficient" sailplane. Accordingly, Baynes modified his Scud design to incorporate a 250 c.c. Villiers engine, which retracted into a housing aft of the trailing edge. Two were built, although both were later converted back into pure sailplanes.

It seems that Leslie Everett Baynes AFRAeS was somewhat camera-shy, there being few photographs of this highly inventive and creative designer readily available. This detail from a larger photograph shows Baynes beside the sole Carden-Baynes Bee in 1937. Born in Barnes, West London, in March 1902, Baynes joined Airco at Hendon at the age of 16 before moving on to Short Bros at Rochester in the 1920s.

In 1934 Baynes formed Carden-Baynes Aircraft Ltd with Sir John Carden, although the latter was sadly killed in an air accident on December 10, 1935. The company continued, however, and in April 1937 the two-seat twin-pusher-engined Bee made its first flight.

RA809, the Baynes "Bat", under tow, probably piloted by Flt Lt Robert Kronfeld. The 33ft span glider was a 1/3 scale flying model of a proposed "flying", or gliding, tank.
In 1941 Baynes proposed that most armoured vehicles, even up to an 816-ton (8,630kg) tank, could be transported by air with the addition of a quickly detachable “all-wing” section. A 1/3rd-scale manned flying model of the “Carrier Wing” (aka Bat) was built by Slingsby and tested in the summer of 1943. The idea was not adopted.

A rare pair of photographs first published in the September 1955 issue of Aeronautics, showing a windtunnel model of a Baynes variable-geometry supersonic design with its wings and V-tail in the fully forward position (left) and fully swept. Baynes was granted patents for his “swing-wing” concept in both the UK and USA.

Another speculative illustration by MARK HARRIS, depicting Baynes’s design for a twin-engined supersonic variable-geometry fighter about to alight on HMS Glory with wings and tail in the fully forward position.

An impression of Leslie Baynes’s design for a Tay-engined variable-geometry supersonic naval fighter by storyboard artist MARK HARRIS (© 2019), based on a newly discovered drawing recently acquired by FAST, with 3D modelling by NEIL FRASER.

A recent donation of material to the Farnborough Air Sciences Trust, largely relating to Alan Muntz & Co Ltd, yielded this previously unpublished general arrangement drawing, AX81, of Baynes's concept for a twin-Tay-engined variable-geometry supersonic naval fighter, the head-on view of which looks very much like a V-tailed Supermarine Scimitar. After a long and remarcable, yet little-lauded, career in aeronautics, Baynes died aged 86 in March 1989. 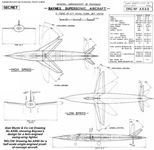 Drawing No AX65, for a half-scale single-engined proof-of-concept aircraft.