The sole Vought V-100 Corsair Junior, with the experimental registration X-14377, with a single 0-30in machine-gun fitted to the flexible mount in the rear cockpit. Surrounded to some degree by mystery and myth, the V-100 was designed specifically for a 1934 military competition for a multi-purpose biplane for Brazil, contemporary promotional literature referring to the type in Portuguese as the “Corsario Junior”.

Vought found fertile ground for the Corsair in Latin America, with Argentina, Brazil, Cuba, the Dominican Republic, Mexico and Peru all acquiring variants of the design during the 1920s and 1930s. Peru’s first examples were delivered in 1926, and the three examples of its final variant, the V-80P, as seen here, were delivered in 1933.

The installation of the Pratt & Whitney R-985 Wasp Junior engine in the V-100. It was intended that the V-100 would offer flexibility in terms of powerplant, with engines of various power ratings being fitted according to the role the aircraft was to be used for. In the event, the sole example was fitted with a 420 h.p. Wasp Junior driving a metal two-bladed variable-pitch propeller.

Its rather short, stubby nose notwithstanding, the “Corsario Junior” was an attractive, well-proportioned biplane trainer, resembling its contemporary, the Boeing-Stearman Model 75, which was slightly smaller in all aspects, and of which Brazil would ultimately purchase 20 examples when re-equipping during the late 1930s. 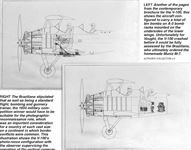 Another of the pages from the contemporary brochure for the V-100, this shows the aircraft configured to carry a total of ten bombs on A-3 bomb racks mounted on the undersides of the lower wings. Unfortunately for Vought, the V-100 crashed before it could be fully assessed by the Brazilians, who ultimately ordered the homemade Muniz M-7.
The Brazilians stipulated that as well as being a standard flight, bombing and gunnery trainer, the 1934 military competition winner would have to be suitable for the photographic-reconnaissance role, which was an important consideration for a country of such vast size on a continent in which border conflicts were common. This illustration shows the V-100’s photo-recce configuration with the observer supervising the operation of the vertical cameras. 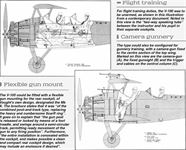 Flight training. For flight training duties, the V-100 was to be unarmed, as shown in this illustration from a contemporary document. Noted in this view is the “two-way speaking tube” between the instructor and his pupil in their separate cockpits.
Camera gunnery. The type could also be configured for gunnery training, with a camera-gun fixed to the centre section of the top wing. Marked on this view are the camera-gun (A), the fixed gunsight (B) and the trigger and cables on the control column (C).

Photographs of the extremely short-lived V-100 are limited, but contemporary promotional material offers some technical detail of the type, including a series of illustrations depicting the various ways in which the type could be configured to fulfil its various roles - in the case of the above, as a gunnery trainer with a single gun.

Although the V-100 was designed and built specifically for the 1934 Brazilian military aircraft competition, the stamp at the bottom of this three- view of the type, addressed to Vought’s representative in Hong Kong, James Fisher, suggests that the Corsair Junior was also to be promoted for sales in Asia. No such sales were forthcoming, however.

The V-100 could be fitted with a flexible gun mounting for the rear cockpit, of Vought’s own design, designated the Mk X. The brochure states that it was “of the combined post-and-track type, replacing the heavy and cumbersome Scarff ring”. It goes on to explain that “the gun post is released or locked by means of a foot treadle, and swings around a semi-circular track, permitting ready movement of the gun to any firing position”. Furthermore, “the entire installation is concealed within the cockpit, and makes possible a clean and compact rear cockpit design, which may include an enclosure if desired”.