An impressive line-up of 57 of the 62 participating A-10A Thunderbolt IIs on the ramp at Fort Drum, New York, where all but one of the world's A-10A units converged on May 16-17 for Hawgsmoke 2002. The event this year was hosted by the previous winning team, the Connecticut Air National Guard's 103rd Fighter Wing/118th Fighter Squadron, from Bradley ANGB, Connecticut. Competition focuses on accurate weapons delivery with bombs, Maverick missiles and the 30mm Gatling gun. Winner's this year were Air Force Reserve Command’s 47th Fighter Squadron from Barksdale AFB, Louisiana, beating off 17 other competing units.

В 1972 году модифицированный НАСА F-8C Crusader стал первым самолетом, летавшим только с ЭДСУ. Под обозначением F-8 DFBW (цифровая ЭДСУ) машина внесла огромный вклад в развитие современных систем управления ЛА.
NASA's Dryden Flight Research Center celebrated the 30th anniversary of the first Digital Fly-By-Wire (DFBW) flight on May 25, 2002. Seen here during early test flying in 1973 is NASA Dryden F-8C 802, the aircraft which made the historic first flight of an aircraft totally dependent on an electronic flight-control system on May 25, 1972. The aircraft was flown by programme chief research pilot Gary Kier, who is now Dryden's director of flight operations, and flight testing for the DFBW programme continued for 13 years until the last flight on April 2, 1985, the 210th sortie. The highly-modified NASA F-8C validated the principle concepts of DFBW, which is now more commonly referred to as a digital flight control system and widely used on nearly all modern high performance aircraft, together with military and civilian transports. The DFBW research undertaken by the F-8C is now considered one of the most significant and successful programmes in NASA history. This significant aircraft is now on permanent display outside the NASA Dryden headquarters at Edwards AFB.

To celebrate 20 years of service in the Canadian Forces, this CF-18A, 188720, has been painted in an appropriate yellow, black and orange hornet colour scheme and is seen here on the ramp back at the St Louis factory, where it was displayed on May 21, 2002. The aircraft will be flown throughout the year by the Canadian Forces Hornet demonstration team, appearing at airshows across North America. Canada was the first international customer for the type, taking its first CF-18B on October 26, 1982, and its fleet of 138 aircraft is the largest of the type outside the USA.

An unusual sight over downtown Sydney on May 16, 2002, with the famous Sydney Harbour bridge and opera house in the background, was USAF/Air Force Flight Test Center/412nd Test Wing/418th Flight Test Squadron C-135E 60-0372. The aircraft was in Australia to take part in a Joint Warrior exercise with Royal Australian Air Force and other aircraft. Despite it being eight months since the September 11 terrorist attacks in the US, the sight of such a large aircraft at only 3,000ft over the city, accompanied by an RAAF Hawk aircraft in loose formation, caused considerable consternation to the general public. This prompted the RAAF to issue a statement later the same day apologising for not publicising the flight beforehand.

The former French Navy aircraft carrier Foch, which was officially transferred to the Brazilian Navy as the NAe Sao Paulo (A-12) in a ceremony at Brest on November 15, 2000, is seen here participating in the joint Argentine and Brazilian Navy exercise ARAEX IV between May 1-5, 2002. This was the first time the recently acquired carrier had participated in the annual ARAEX exercise. Operation of Argentine Navy Super Etendards and S-2T Turbo Trackers (both of which can be seen on the deck here) from the Brazilian carrier marked the first time that their pilots had been able to undertake arrested landings for some considerable time.

Eight of the 12 C-17A Globemaster IIIs which flew a multiship formation over downtown Charleston, South Carolina, the Ashley River and Charleston AFB on May 14, 2002 during an airdrop training flight. This marked the largest ever formation of C-17As flown to date.

Second prototype RAH-66 Comanche 95-0001 gets back into the air on May 23, 2002 with newly installed Mission Equipment Package (MEP) software and new engines. The helicopter had been withdrawn from the flight test programme in May 2001 to enable installation of its new 1,563shp (1,166kW) LHTEC T-800-LHT-801 engines and integration testing of the MEP.

The 600th ERJ was handed-over by Embraer on May 28, 2002 at its Sao Jose dos Campos facility. The aircraft, ERJ 145LU HB-JAY seen here, was the 25th and final firm order example for Swiss, although the carrier still holds options on a further 15 of the type.

Embraer's ECJ-135LR Legacy business jet demonstrator, PP-XSW (c/n 412), made its European show debut on static display at the European Business Aviation Conference and Exhibition in Geneva at the end of May 2002. Following the show, the aircraft departed on a ten-city demonstration tour across Europe to promote the aircraft to prospective customers. Following Brazilian certification in December 2001, three aircraft have now been delivered to local customers with further deliveries anticipated once FAA certification is achieved, anticipated in the second quarter of 2002.

Part of the wrecked apron at Kabul International Airport, showing two of the damaged Ariana fleet, a Boeing 727 (left) and Antonov An-24 (right).

Part of the wrecked apron at Kabul International Airport, showing two of the damaged Ariana fleet, a Boeing 727 (left) and Antonov An-24 (right).

Technicians position a US Army Special Forces MH-47 Chinook in the Benefield Anechoic Facility at Edwards AFB, California, during tests to improve its radar antennae performance between May 20-28, 2002. During the tests, the suspended helicopter was rotated whilst electronic warfare experts measured a series of antenna patterns. Radar-absorbent materials were also placed on the helicopter to determine the best positions for radar warning receiver antennae. Working with lead contractor ITT Avionics and the US Army's technology applications programme office, the team was to determine whether improvements to the existing placement of RWR antennae on the Chinook was warranted. 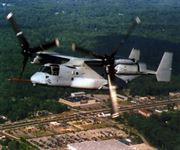 Bell Boeing MV-22 Osprey 164942 (c/n 90010) seen on its first flight from NAS Patuxent River, Maryland on May 29, 2002 over 17 months after the type was grounded following a fatal crash on December 11, 2000. The aircraft has been extensively modified with improvements to its hydraulic and flight control software systems.

Indian Airlines A300B2-101 VT-EFW seen on approach to Delhi/Indira Gandhi International Airport on February 3, 2001. The aircraft was damaged there beyond repair in a taxiing accident on March 8, 2002.

The former French Navy aircraft carrier Foch, which was officially transferred to the Brazilian Navy as the NAe Sao Paulo (A-12) in a ceremony at Brest on November 15, 2000, is seen here participating in the joint Argentine and Brazilian Navy exercise ARAEX IV between May 1-5, 2002. This was the first time the recently acquired carrier had participated in the annual ARAEX exercise. Operation of Argentine Navy Super Etendards and S-2T Turbo Trackers (both of which can be seen on the deck here) from the Brazilian carrier marked the first time that their pilots had been able to undertake arrested landings for some considerable time.

Former British World BAC One-Eleven 531FS G-OBWE (c/n 242), which had been stored at Southend since being retired by the airline in 1999, has been sold to a new company in Sierra Leone and was registered 9L-LDJ on May 24, 2002. It is seen here at Southend awaiting delivery. The UK registration was cancelled on May 15, along with Srs 518FGs G-OBWA and G-OBWD, both also exported to Sierra Leone, presumably for the same owner.

Sikorsky CH-3E N308SB (ex USAF/63-9691) undergoes test flying at Helipro's Bellingham, Washington, facility in early June 2002 prior to hand-over on June 10 to the San Bernadino County Sheriffs Department. The fully refurbished helicopter is the first of this type to enter service in this kind of public use category.

Second prototype X-31A, 164585 ‘031’, the sole remaining survivor, gets airborne from Patuxent River Naval Air Station, Maryland, to commence Phase II of the joint US-German VECTOR (Vectoring Extremely short take-off and landing Control Tail-less Operation Research) programme. The aircraft has been grounded since last year for a number of modifications, the most obvious external change being the repositioning of the nose boom on top of the nose cone, rather than below it, as before.

Final checks are made on Spanish Air Force two-seat EF/A-18B CE.15-11 ‘12-74’, the first to undergo a midlife upgrade, as it prepares to make its first flight from the EADS CASA Military Aircraft facility at Getafe on April 29, 2002. A second, single-seat, aircraft will also join the flight test programme shortly.

Boeing YAL-1A Airborne Laser (ABL) prototype, 01-0001 (c/n 30201), prepares to roll-out of Boeing’s Modification and Maintenance Center in Wichita, Kansas, on May 28, 2002 after most extensive modification ever performed at a Boeing facility. First flight is planned for later this summer. Prominent in this view is the nose-mounted laser turret installation, one of the major airframe modifications undertaken during the work at Wichita.

In a ceremony at Boeing’s Mesa, Arizona, factory on June 10, 2002, the 30th and final Royal Netherlands Air Force (RNLAF) AH-64D Apache, Q-30 seen here landing at Mesa, was formally handed-over. The first Dutch AH-64D had been delivered in April 1998, although Dutch crews began flying leased earlier model US Army AH-64As two years prior to that.

Until recently stored at Melbourne following the demise of Ansett Australia, Boeing 737-3Q8 VH-CZH (c/n 23535) is seen here following its arrival during May 2002 at Lasham, where it will be prepared for delivery to Channel Express. It was officially UK registered as G-CELS on May 17 to the Dart Group pic, Channel Express’ parent company. 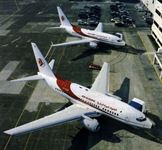 Boeing announced on May 15, 2002 that the first new 737-800 has been delivered to Yemenia - Yemen Airways. The aircraft, 737-8Q8 7O-ADL (c/n 30645), is the first of three ordered a year ago from ILFC on long-term leases. Yemenia will use the new aircraft on routes throughout the Middle East and Gulf States region, Europe and Asia. The remaining two aircraft being leased from ILFC will be delivered later this year. 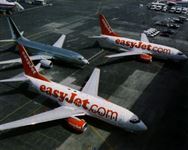 An artist's impression of a Northrop Grumman proposal for a Quiet Supersonic Platform (QSP). The Defence Advanced Research Projects Agency (DARPA) announced on April 29, 2002 that two companies had been selected for Phase II, the systems study segment, of the QSP programme. Northrop Grumman received $2,699,780 in funding for the programme on March 14 and Lockheed Martin received $2,427,009 on March 25. For Phase II, the goals have been adjusted to concentrate on characteristics more relevant to a long-range supersonic military aircraft and focus on refinement of vehicle designs.