Initially accepted by the US Navy in preference to Grumman’s XF4F-2 was the Brewster XF2A-1 Buffalo. This was the Navy’s first monoplane fighter. 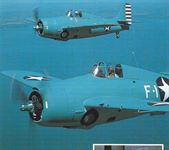 Wildcat pair formate over the skies of Oshkosh

The definitive production version of the Wildcat, the General Motors-built FM-2.

Genesis of the F4F monoplane is apparent here in Grumman’s last biplane fighter for the US Navy. This XF3F-3 prototype (BuNo 1031) and 27 production machines were built in 1938.