Taken at BA9 Luanda in 1975, this B-26 Invader of Esquadra 91 shows the late camouflage used in the African war, a wrap-around antiradiation olive-green with low-visibility markings.

The FAP received two Boeing 707-3F5Cs in 1972 to improve its transport capability between the homeland and the African colonies. No 8801 is pictured at Portela.

One of the Caudron G.4s destined to form an Esquadrilha Expedicionaria in Angola, taken at Vila Nova da Rainha in 1918, before leaving Portugal. (FAP via author)

F-86F 5347 of Esquadra 51 based at BAS Monte Real. The overall finish was silver, with a standard blue fin.

The first P-3P Orion was delivered in 1988 wearing the US Navy-style grey-white camouflage, which was later replaced throughout the fleet by a grey low-visibility scheme.

The 26th Spitfire Vb received in 1943 was pictured at Ota still without the‘MR-’codes.

General view of a parking area at Ota in 1946. In the foreground, can be seen a batch of Spitfire LF.Vbs still without serials and squadron codes. In the background are the aircraft of ‘MR-’ squadron. 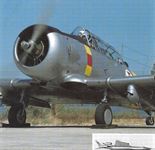 Sikorsky UH-19A 9101 was the first helicopter operated by the FAP in 1954. It was assigned to BA4 for SAR missions.

Alouette III 9342 in the later green-brown camouflage adopted across the FAP by 1980.

SA.330 Puma 9505, the type representing a huge increase in both airlift and SAR capabilities.

One of the three Farman F.40s of the Esquadrilha Expedicionaria shipped to Mozambique, pictured in September 1917 on the airfield at Mocimboa da Praia.

The Deperdussin Type B ‘Casta Suzana’, used as a ground trainer by the Companhia de Aerosteiros, in 1916.

Two Alpha-Jets of the Baja-based Esquadra 301. They still wear the original German camouflage, which since 1996 has been replaced by the standard green-brown camouflage.

From RAF stocks, Portugal received eight Lysander IIIAs in September 1943.
Lysander IIIa 361 was the first received by Portugal, and assigned in 1943 to Tancos.

The Maurice Farman model 1911/1912 was acquired through public subscription promoted by the newspaper ‘O Comercio do Porto’, and was the first Portuguese military aircraft.

Avro 504K ‘No.6’, showing the markings of the Escola Militar de Aviagao (EMA), at Sintra.

Esquadra 504 has been operating three Falcon 50s for VIP transport since 1990.

The third Dassault Falcon 20DC (8103) acquired from Federal Express in 1984, which formed Esquadra 504 at Montijo.

A Martinsyde F.4 Buzzard of the Esquadrilha de Caca 1 at Tancos. The unit markings consist of a yellow greyhound and a red stripe on fuselage.

CASA C.212A-1 16501 (formerly 6501) is one of two which can receive ECM equipment. In this case, the standard nose indicates the normal use as cargo aircraft.

Gloster Gladiator II 461 was one of the first 15 received in the summer of 1939, and initially assigned to BA2 at Ota.

The first of three Hawker Fury Is purchased by Portugal in 1934.

Lockheed PV-2 4604 in white and silver finish as operated for transport missions.

The only Potez 25 Bidon was received by the Aeronautica Militar in 1928; it was initially operated by the EMA at Sintra.

One Avro 631 Cadet was acquired in 1934 to participate in the evaluation for the new trainer.

The first DH.84 Dragon II to be introduced into service. It was operated until 1950.

In January 1963 the FAP received the first 12 Cessna T-37s, assigned to the flight school at BAI Sintra.

The flight line of Esquadra 101 at Beja, which operates the TB.30 Epsilon for screening and primary training.

OGMA-built DHC-1 in flight over the Atlantic Ocean wearing the initial silver livery.

Vampire T.55 5801 was the first of two acquired in September 1952 for evaluation as possible jet trainers for the FAP. They were finally passed to Biafra in 1962.

One of 13 OGMA/Vickers Valparaiso IIIs modified from 1933, and operated by the GAI at Amadora.

A Vickers Valparaiso I, export model of the Vixen, ten of which were purchased in 1923.