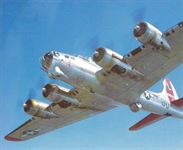 A familiar US airshow performer, vividly exhibiting a rewarding use for that abundant nose Plexiglas! ‘Texas Raiders’, B-17G-95-DL 44-83872 (N7227C) of the Confederate Air Force.

Master Sergeant Penrose Bingham under the nose of B-17F ‘Idiot’s Delight’. There are 50 mission tallies and at least 14 fighter ‘kills’ marked up.

‘Texas Raiders’ in her ‘pure’ civilian days as an air survey platform with Aero Service Corporation, based at Philadelphia. The aircraft operated with a variety of aerials and probes, but in this view is very ‘clean’.

Fortress IIA FK185 in February 1944 with a remotely-controlled Bristol B.16 nose turret and ‘chin’ installation. The gun is a 40mm Vickers ‘S’ for anti-submarine duties.

Interesting view of two B-17Gs prior to, or during delivery. The rear aircraft is a Fortress III for the RAF with the serial HB779 conveniently on view between the main gear of the USAAF example in the foreground! HB779 served with the Royal Aircraft Establishment and then went on to 214 Squadron at Oulton.

One of two B-17Bs detached to Ladd Field, Alaska, in 1941 for cold weather trials with high visibility orange areas on tail, wingtips and engine nacelles.