One of two Lancaster 10DCs modified to carry Ryan Firebee target missiles. The 10DC was a modification of the 10MR outfitted with wing pylons and missile operator's position in the rear. 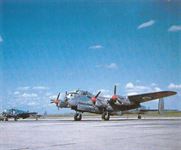 Rare colour of the first 10N 'Zenith' of the Central Navigation School taken at Winnipeg in the summer of 1954. 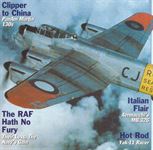 Possibly one of the finest colour photos of one of the earliest search and rescue Lancaster 10s, 1949.

A 107 RU Lancaster in an intermediate colour scheme. Topside white does not cover rear canopy and lower surfaces are in light blue-grey common to Neptune and Argus Maritime Command aircraft. Nose turret is overpainted in aluminium.

A flight of 407 Lancasters over the British Columbia coastline. Note that '996 has the old H2S radar, while '857 has the newer APS-33 radar can.

A fine portrait of a 408 Squadron aircraft over Ottawa in the autumn of 1959. 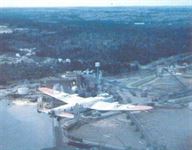 'AF-N' of 404 Squadron makes a bombing run over a paper mill. In May of 1953, the squadron took part in a mock attack of Halifax to test civil defence procedures

Lancaster MRs of 407 Squadron fire up for a morning exercise at Comox, BC. This MP unit kept its 'Lancs' until replaced by Neptunes in 1958-1959.

One of the last SAR Lancasters to see service was KB889 shortly after its retirement from 107 RU, seen here at the Niagara Falls Museum in 1964.

Possibly the first colour photos of one of the first SAR Lancasters belonging to 123 SAR Unit in 1949.

No.404 Squadron at Greenwood, shortly after receiving its new Lancaster 10MRs.

Another 407 Squadron Lane in the late colour scheme with grey undersides, black fuselage flash and newer APS-33 ventral radar 'can'.

The one and only Lancaster 10O being prepped for its first flight. Although the jet engine nacelles are very sleek, the nose fairing is a relatively simplistic design. Note the stored Lancasters in the background

One of the few 10S models to see active postwar duty, FM148 started its career with WEE then went to Trenton for utility work and finally to Greenwood. It is seen here at Winnipeg en route to storage and final disposal. Note the dorsal turret 'observation deck' first used by WEE flight

FM216 'AP-D' of 413 Squadron and demonstrates the clean lines of the Lancaster XP variant. One of the camera ports for the tri-met system can be seen directly below the roundel

Portrait of a photo survey crew at the onset of a new season. Visible is the unique plywood nose turret fairing with solar navigator dome, Rebecca antennae and 408 Squadron crest. Protrusion above bomb bay is outlet for trailing wire antenna.

Operation Sweetbriar was a joint RCAF-USAF exercise held in February 1950 to evaluate a defence against an enemy attack from Alaska under winter conditions. No.408 Squadron provided three Lancasters for photo recon duties. FM214 being refuelled at an Alaskan base

KB972 'Cuddles', still in the wartime colours of 408 Squadron. Called up from storage, she waits in line for conversion to a Lancaster 10MR. Sadly, the aircraft is recorded as burned shortly after the conversion was completed

One of only a handful of XBR models to be built, FM222 spent its active postwar career with the Air Armament School at Trenton. Although not visible in this photo, it retained an armed mid-upper turret for air-to-air gunnery training. Spinners are in black and yellow unit colours.

The AR variant had more aerials on the topside of the aircraft. Note the white topsides cover the rear half of the canopy

FM211 'Zenith' was one of five navigational trainers produced. This aircraft had the distinction of being the first Canadian aircraft to overfly the geographical North Pole

Aerial photo of the first flight of the Mk.10O over Toronto. Once airborne, the aircraft could cruise comfortably on either set of engines. A minimum of paintwork was applied,

No.407 Squadron 10MR seen at Lakehead Airport in 1953. Spinner colour is grey

Lancaster KB839 was one of only three 10AR Lancasters built. It is shown in the earliest colour scheme of grey undersides with red lightning flash

'AT-A' was the first 10MR assigned to 404 Squadron. MRs were essentially production XBRs with the dorsal turret removed. Although crewmen swear the aircraft carried guns it is difficult to find a photo of one that is armed. Spinner colour is light blue.

The only photo the Author has uncovered of an armed 10MR, an aircraft belonging to 407 Squadron patrolling the west coast of Canada

Posing themselves for the camera are the photographers of this 408 Squadron photo-ship. FM207 was responsible for taking in-flight photos of each of the aircraft types then in service with the RCAF circa 1956. The open turret position apparently made for an excellent camera/sight-seeing location.

One of two Lancaster 10DCs modified to carry Ryan Firebee target missiles. The 10DC was a modification of the 10MR outfitted with wing pylons and missile operator's position in the rear.

FM218 of 413 (P) Squadron was one of the prototype XP aircraft and was often recycled through Avro's shops to be fitted with new modifications. It became the test vehicle for the SHORAN programme

Sporting a new paint scheme, nose turret fairing and a clutch of aerials, FM120 poses for the camera over the Ottawa area countryside.

The aluminium painted engine nacelles place the date of this photograph near the end of the career of this 408 Squadron Lancaster. This unit's aircraft were the first and last postwar Lancasters operated by the RCAF.

The first Lancaster XN sits outside the Avro Canada hangars. Behind arc the airframes of four other 'S' models awaiting conversion

Most of the added equipment is on the undersides of the 10AR and include six camera positions, search/navigational radar and electronic surveillance aerials. The rear turret fairing holds survival equipment.