Chesapeake I AL936, of which 50 were allocated to Britain's Royal Navy, with four wing guns, 'Anglicised' arrester gear and radio. A Douglas Boston for RAF service stands in the background.

A Vought SB2U-1 Vindicator on display via suspension from a hangar roof at the 1939 New York World's Air Fair.

Good underside view of an SB2U-1 Vindicator during a landing approach, showing to advantage wheel wells and flaps. BuNo 0773 was allotted to Commander USS Ranger Air Group, circa 1938-1940.

A V-156 Vindicator transferred to Britain's Royal Navy as a V-156B1, Chesapeake I. Note bomb crutch below fuselage.

Resplendent in its special paint scheme, the Vought V-156 export model on display at the French Aviation Exhibition of 1938, where it aroused much interest 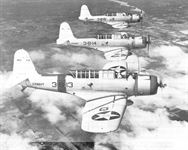 VOUGHT SCOUT BOMBER MONOPLANES of V-B-3 Squadron, U.S. Navy. These machines can be used as dive bombers with a 500lb. or a 1.000lb. bomb.
Another view of three SB2U-1s of Section Five, VB-3 (High Hats), all carrying auxiliary tanks

The SB2U-3 featured armour protection for the crew, guns of larger calibre and extra fuel. This particular machine served with US Navy Squadron VS-1, although most went to US Marine Corps units.

Chesapeake I AL936, of which 50 were allocated to Britain's Royal Navy, with four wing guns, 'Anglicised' arrester gear and radio. A Douglas Boston for RAF service stands in the background.

Formation of Royal Navy Chesapeake Is, the nearest being AL924 'K'. The type flew mostly with second line training units, a number being allocated to 811 Squadron at Lee-on-Solent. Note, centreline bomb crutch and underwing bomb racks

Main competitor to Vought’s XSB2U-1 was the Brewster XSBA-1.
The XSBA scout bomber was Brewster's first design and in several respects resembled its XF2A-1 single-seat fighter.

First production Vought SBU-1 (BuNo 9750) with fixed landing gear, from which was developed the similar XSB3U-1 with retractable gear, planned as a safeguard against failure of the XSB2U-1 monoplane 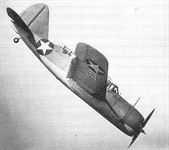