The Canadian Car & Foundry V-1000 project, designed by Charles Villiers. This transport aircraft would have utilised the lifting fuselage in its most advanced form. Note the absence of tail booms. Most of the disposable load was located spanwise in the body, thereby allowing a very low structure weight with increased cabin volume. Designed to carry 135 passengers with baggage 4,500 miles non-stop at 220 m.p.h., the V-1000 had a 220ft wing span and a wing area of 4,499sq ft.
The V-1000’s empty weight was 120,000lb and it grossed at 220,000lb. Because of the efficiency of the lifting fuselage principle the V-1000 could maintain its 220 m.p.h. cruising speed on only 45 per cent power. Maximum endurance would have been 21hr.
Although the National Research Council of Canada tested a wind tunnel model of the V-1000, no prototype was built.

Burnelli Avionics Corporation was the last Burnelli organisation actively to pursue the Burnelli lifting body concept. Illustrated here was that company’s study for a safe, highly utilitarian and economical aircraft powered by two Rolls-Royce 6,750 e.s.h.p. Tynes with contrarotating propellers. The design embodied emergency flotation and wing release facilities in case of ditching. The aircraft had a wing span of 122ft and a cargo capability of 4,500 cu ft. Alternative passenger versions were proposed. 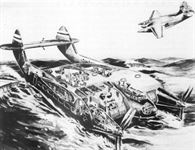