Short 184 8081 lying off Rochester. One of a batch of 75 to be built by Shorts at their new Seaplane factory, the '184 represents the Company’s earliest success in large scale production.

A development of the Type 184 was the ’310. Illustrated is the Sunbeam Cossack-powered Type A prototype, 8317, which first flew in July 1916. Following structural strengthening, the Type A4 was standardised on and 74 were built by Shorts with Sunbeam building a further 50. 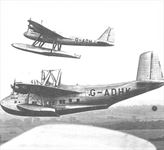 Moment of separation of the Short-Mayo Composite. 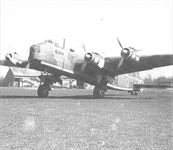 Second Stirling prototype, L7605, seen at Rochester Airport. Eventually taken over by the Royal Aircraft Establishment at Farnborough, this particular aeroplane was eventually written-off following a heavy landing in October 1942.

Singapore II N246. Really the prototype of the Singapore III, only one of this type was ever built. Seen here above the River Medway, the aircraft is in its much improved version having an enclosed cockpit, triple rudder replacing a single rudder and a planing unit with a pointed main step. 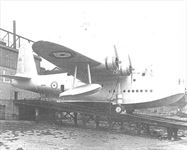 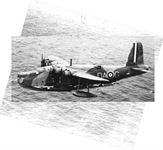 Well-weathered 210 Squadron Sunderland I (L2163, the sixth production example) in warpaint, serving with No 210 Squadron early in the war. This photograph shows the open gun positions introduced in the upper rear hull, and the bomb-aiming "V” window extended beneath the nose turret. It served a variety of units until it was sunk in a gale off Stranraer on January 15, 1942, whilst with 228 Squadron. 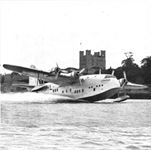 THE SHORT EMPIRE FLYING-BOAT: fitted with four "Bristol" Pegasus engines. An all-metal high-wing cantilever monoplane flying-boat of high performance, with two-deck, two-step hull, and wing flaps. Provides accommodation for 24 passengers and baggage and 1 1/2 tons of mail. Maximum speed, 200 m.p.h. "Cambria" holds the record for the Trans-Atlantic flight - 10 1/2 hours.
The Empire, or C-Class flying boat, Canopus. The successful prototype of a long-range of aircraft, Canopus entered service with Imperial Airways on October 22, 1936. Again seen on the River Medway, both Rochester Castle and Cathedral can be seen. 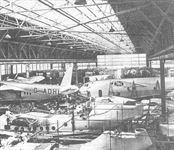 Photo from a pamphlet produced by Shorts to mark the Royal visit to Rochester of 1936. C-Class Canopus (top) is seen nearing completion. 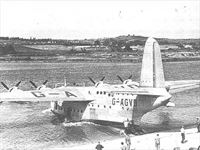 Factory grouping around the last Solent 2 for BOAC, G-AHIY Southsea, 1948.

Short Calcutta. The interesting point about this photo is the excellent view it provides of the Seaplane factory which was sited about half-a-mile down river from Rochester bridge. 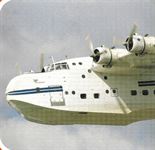 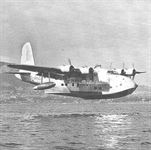 Sandringham 5 G-AHZB Portland of BOAC about to touch-down. It was built initially as Sunderland III NJ171 by Blackburns.