The completed, but engineless, P.B.1 on its stand at the 1914 Aero Show at Olympia, before its name was painted on the bows.
Although several years before its time, the flying boat exhibited by Mr. Pemberton Billing at Olympia in 1914 was undoubtedly the forerunner of the modern Supermarine flying boats. The actual machine was not a success, but all the essential features as circular-section hull, carefully cowled Gnome engine and three-bladed airscrew were there, and only needed proper combining.

Noel Pemberton Billing in a characteristic pose with the P.B.1 at Olympia.

Noel Pemberton Billing, in the peaked cap, leads the engineless P.B.1 out for flotation trials.

Billing taxying in the modified P.B.1 on the Itchen, May/June 1914. It failed to fly.

The P.B.1 on the Woolston slipway in May/June 1914 after modification, with the Gnome engine mounted on top of the hull behind the repositioned cockpit, driving a pair of pusher propellers. 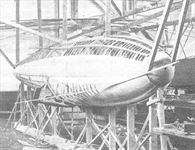 The hull of the P.B.1 flying boat under construction in 1914.

A contemporary advertisement for the P.B.7, May 1914. Note the nose-mounted gun.

Front and side elevations of the P.B.2 project. Note the hull-mounted engine and the ‘winglets’ which formed the lower ‘plane