The D.H.110, the most advanced all-weather interceptor yet to be ordered for the Royal Navy, is in production by the de Havilland Aircraft Company Ltd.

Me HA-1109-M1L BUCHON. In 1943 the Spaniards obtained a licence from Germany to build the Me 109G. In spite of the war-time needs of Germany, a number of incomplete airframes arrived eventually, without engines. After various moderately successful experiments with Hispano engines and foreign airscrews, it was decided, ten years after the arrival of the first machines, to fit Merlin engines to the modified Me 109G airframes then in production at Seville. This production is now ceasing with the advent of American Sabres (it is intended to re-equip the fighter squadrons with the F-86F).
Salient features: Deep fuselage with blunt nose, flat-topped and broken by cockpit step. Full chin radiator, and underside of rear fuselage upswept. Single, triangular rounded fin and rudder with fixed tailwheel. Equi-tapered tailplane with small cut·out and rounded tips mounted low on fin. Low wings, noticeable dihedral with fairly sharp taper, more on trailing that leading edge. Rounded tips. Shallow wing-root bath radiators under wing.

Many Australian readers have sent details of this Maurice Farman Shorthorn which, after gathering dust for thirty-eight years, is now flying again from Moorabbin aerodrome.

At Ringway Aerodrome on 20th April, the last Fairey Firefly-U.Mk.8 target drone was formally handed over by Mr. Richard Fairey, General Manager of the Fairey Aviation Company, to Mr. H. M. Kemp, Principal Inspection Officer of the Aeronautical Inspection Directorate, who accepted it on behalf of the Ministry of Supply.

This latest version of the Martin Canberra, the B-57E, will replace target-towing squadrons' B-29s. External containers will carry up to four targets; they, and the cockpit controls and cable reels (mounted inside the rotating bomb door), can be easily removed and the aircraft reconverted to the normal bombing role. A large selection of targets is available, giving realistic radar responses on air and ground instruments. Towing speeds and heights will be increased considerably, both for gun and rocket practice, by this machine.

Stroukoff YC-121E Pantobase MS-18. Although the Chase (Kaiser-Frazer) XC-123 Avitruc was taken over by Fairchild for production (233 for U.S .A.F.) at Hagerstown , Maryland, in mid-1953, the ex-Chief Engineer of Chase, Michael Stroukoff formed the Stroukoff Aircraft Corporation at West Trenton, New Jersey to exploit his basic design . The MS-18 Pantobase (All Bases) is the forerunner of the MS-8-1 which will combine both the YC-123E 's Pantobase installation (and fixed sponsons) and the XG123D's BLC (Boundary Layer Control) wing. The MS-8-1 may be powered by two turboprops in place of the current 2,500-h .p. P. & W. R-2800-52W radials. The YC-123E Pantobase has a watertight bottom and semi-retractable, heavy-duty land /water skis permitting take-off and landing on ice, sand, water, or ploughed land. Tests are continuing at the request of the Air Research & Development Command.

A fine flying picture of a Lockheed C-130A medium cargo transport. This aircraft has been built in some numbers since the first production machine made its maiden flight in April 1955. Powered by four Allison T56-A-1s, developing 3,750 e.s.h .p. each, the C-130A Hercules has a span of 132 ft. 7 in. No performance figures have so far been released . It will form the equipment of Tactical Air Command transport squadrons, and is being built at Government Aircraft Plant No. 6 at Marietta, Georgia.

One of the few German W.W.I. aeroplanes carrying patee crosses is this early production Fokker DVII.

AVRO CF-100 Mk. 5. The Avro CF-100 Mk. 5 is basically a Mk. 4 with a 3-ft. panel let into each wing to extend the operational performance at height for its photographic reconnaissance duties. The new sections have been added to the wingtips of a Mk. 4 airframe and are parallel-sided. A similar extension has been made to the tailplane, adding about 12 sq. ft. to its area. The standard Mk. II Orenda has been replaced by a later Mark. Armament is to consist of twelve Hughes Falcons, though on the prototype, 18323, the wingtip rocket pods of the Mk.4 have been retained.
Salient features: The CF-100 has a long cylindrical fuselage with the one-piece bubble canopy set well forward. The clean lines of this fuselage are broken at mid-point by the massive rectangular engine block, each unit set over the wing root. The wings are placed halfway along the fuselage length, and carry even taper to within about 3 ft. of each tip, when the chord becomes constant. Wingtip fuel or rocket pods may be carried. The dihedral is slight (three degrees) and the wings low set. 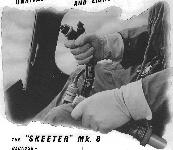 TBM-1E Avenger. Quite a few examples of the Grumman Avenger are still flying throughout the world. The Fleet Air Arm has a number of TBM-3Es with anti-submarine radar in a radome under the starboard wing . This fine study of a U.S . Navy Reserves' TBM-3E shows the bomb bay doors extended and the rocket and bomb carriers under each wing. BuAer No. of this Avenger is 89402. The maximum speed of the TBM-3E is 261 m.p.h. at sea-level. In the earlier versions of the Avenger the "step" under the rear fuselage accommodated a gun position . Span is 54 ft. 2 in., and length 40 ft. lit in.; a.u.w. 16,760 lb.

The RWD-11 eight-seat feeder Iiner with a neat, retractable undercarriage.

The Avro Shackleton Mk 3 is basically the same as the Mk. 2. Main external difference is the tricycle undercarriage, and the cockpit has been redesigned to give better visibility. There is storage space for anti-submarine weapons and a lifeboat can be carried as an external store, slung below the fuselage.

DOUGLAS C-133A. Intended as an eventual replacement for the U.S.A.F.'s Globemasters, the Douglas C-133A prototype, 4135, flew for the first time in the last week in April, two months after leaving the factory for the first time. Parts for six further aircraft are in the factory. With more than twice the carrying capability of the C-124, it will operate from the same-size fields.
Salient features: The 16-ft. 2-in. diameter fuselage has rear-loading doors for the 90-ft. long cargo hold, and a pressurised and heated cockpit. The wing carries integral fuel tanks for most of its span, holding about 16,800 gallons. The position of the tailplane was selected in order to give stall warning: as it sinks into the wing wake near a stall, buffeting is felt. The undercarriage consists of twin nosewheels, and quadruple main units retracting vertically into pods. Small solid-rubber wheels are fitted in the rear-loading ramp to take care of a nose-high landing. Each tandem pair of mainwheels retracts separately if necessary, in order to enable wheels to be changed without jacking-up. In the port pod are auxiliary gas turbines for services, and in the starboard one is the single-point, 1,200-g.p.m. refuelling connection.

Lockheed T2V-1 SeaStar. Bedecked in the new U.S. Navy training colour scheme of white and orange, the SeaStar is now in production as an advanced, two-seat, jet conversion trainer which will at first supplement and then ,replace the Lockheed TV-2 (T-33A) Shooting Star from which the T2V SeaStar is developed. Powered by a 6,100-lb.s.t. Allison J33-A-22, the SeaStar has almost twice the range of the Shooting Star (T2V - 900 miles) for an a.u.w. of 16,400 lb. and a maximum speed of 600 m.p.h. Span is 42 ft. and length 38 ft. Unusual is the adoption of both U.S. Navy markings and the civil registration N125D.

SHORT S-3b CHAMOIS. A little-known corps reconnaissance (army co-op.) biplane of the mid-1920s is the Oswald Short-designed S.3b Chamois, J7295, first flown by the well-known C.T.P. J. Lankester Parker at Lympne aerodrome on 14th March 1927.
The Chamois traces its history from the Silver Streak, which was exhibited at the 1920 Olympic Aero Show. The Air Ministry purchased the Streak and tested it for two years at R.A.E., Farnborough. In due course the Air Ministry issued a "Bristol Fighter-replacement" Specification (19 /21) for which Short Brothers contracted to deliver two S.3 Springbok I two-seaters. Powered by a 400-h.p. Bristol Jupiter IV radial, the S.3 (J6974 and '5) was truly all-metal, with duralumin monococque fuselage and two-bay, equal-span wings. The strength/weight factor of the mainplanes was disappointing and the Air Ministry ordered three more Springboks with lighter, fabric-covered wings attached directly to the lower fuselage and redesigned tail assembly. The first of these S.3a Springbok IIs (J7925 to '7) was flown by J. Lankester Parker at the Isle of Grain on 25th March 1925.
The Chamois of 1927 represented a second attempt at the basic specification. The airframe of the first Springbok II (J7295) was stripped and adapted to take the more powerful 450-h.p. Jupiter VI. Like the Springbok, the S.3b Chamois had a cut-out in the upper mainplane for the pilot's head . No data is available (apart from length 26 ft. 11 in .). The 27th April-onwards trials by A & A.E.E., then at Martlesham Heath, intimated a disappointing performance, and the only prototype was scrapped.