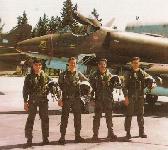 Four Grupo 5 de Caza pilots at Sail Luis after the war, second from right is Captain Carballo and to his right is Lt Kinke. Behind is combat veteran A-4B C-232 with two ship ‘kills’.

3 Escuadrilla Aeronaval de Caza y Ataque A-4Qs in tight echelon formation shortly before the war. Two of the Skyhawks lost on May 21 are illustrated.

A-4C refuelling from a KC-130H outbound for a target.

Close-up of an A-4C with a ship ‘kill’ dated May 23,1982, although there no record to substantiate such a claim.

Lt Bolzan aboard C-237 just before deploying from San Luis to Rio Gallegos late in April 1982. He was shot down and killed on June 8 while flying C-204.

C-236 at Rio Gallegos with five ship ‘kills’. On the right is Captain Carballo, a Grupo 5 de Caza flight leader during the war.

A-4B C-225 seen at San Luis before the war with a configuration - four Zuni rocket pods and centreline tank - not used during the Falklands War.

Low-level flying! An A-4B over the Patagonian steppes shows how they made the run-in for their anti-shipping strikes.

During the Battle of San Carlos the Mirage IIIs undertook daily sorties over the Falklands but did not engage the Sea Harriers.

During the Battle of San Carlos, Super Etendards achieved their most cost-effective mission destroying the ‘Atlantic Conveyor’ on May 25. The unit operated with four Super Etendards, with a fifth used as a spares source, but after the conflict the nine remaining jets were delivered.

‘Ace’ Super Etendard was ‘3-A-203’ which scored the ‘Sheffield’ and ‘Atlantic Conveyor’ kills. This historic aircraft was lost in an accident in May 1996.

After the conflict, the Daggers were upgraded to ‘Finger’ standard, which including fitting Kfir C7 avionics, including Elta’s ranging radar.

Learjets from II Brigada Aerea did surveillance and pathfinder duties for the fighter bombers, a dangerous job for which the type was not designed. One of them (T-24) was blasted out of the sky on June 7 by a Sea Dart SAM fired from HMS ‘Exeter’ with the loss of all five aboard.

Shortly after the war ten Peruvian Mirage 5Ps were bought to make up Dagger losses. After first serving with Grupo 6 de Caza, then Grupo 10 de Caza at Rio Gallegos (illustrated) they now serve again with Grupo 6 de Caza. Eight are in service, renamed ‘Mara’ and upgraded with Omega, GPS, RWR and flare/chaff dispensers. They took the serials of lost Daggers, as C-409 illustrated, which originally was the Dagger A in which Lt Luna was shot down and ejected over West Falkland by a Sea Harrier.