Fairey Gannet WN365 (c/n F.9137) was the prototype T.2 dual trainer variant, converted from an A.S.1 which was built at Hayes as part of a batch of 100. This aircraft first flew on August 16, 1954, and had dual controls in the forward cockpits, the instructor occupying the rearmost of the two and being supplied with a retractable periscope. 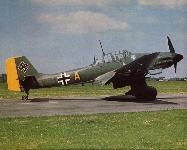 Junkers Ju87G "Stuka”. This photograph shows the only remaining example left in Western Europe, again in the St Athan collection. It was taken last year, before it was refurbished for display at the RAF Museum, when it was in the guise of a Ju87D, the type it portrayed in the film The Battle of Britain. It was fitted with wooden dive-brakes, screamers, an MG17 machine gun and a fibre-glass bomb and painted in the colours of a squadron active in Europe at that time.
It has now been returned to what is believed to have been its original condition when it was found, with others, at a factory near the Russian border, where it had just been converted from a Ju87D-5 Trop. to a Ju87G tank-buster. The hardpoints for the two 37mm anti-tank guns (which were housed in pods beneath the wings) can still be seen, and this version lacks any dive-brakes. Two different Werke numbers have been quoted for this aircraft, and the conclusion has been reached that Nu.2883 of the Ju87D-5 airframe was changed to Nu.494083 on conversion.