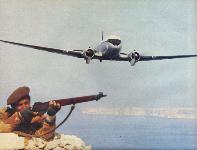 Stored since 1978, Fairey Gannet AEW Mk III XL482 has now been purchased by a Texan and allocated the US Civil registration N1350X. Following restoration to flying condition at RNAS Culdrose, where Brian Halsey’s photograph (below) was taken, it made a successful test flight on February 4, 1982 and departed on February 15, piloted by Lt Cdr Ken Lamprey and Lt Cdr Phil Howard of the Royal Navy. It was flying to Texas via Lossiemouth, Ice­land, Greenland, Canada and down through the USA.

The Planes of Fame Air Museum's North American P-51A, the only example of its kind flying, photographed in 1981 by FRANK B. MORMILLO. Painted in RAF markings, as originally delivered from the NAA factory, P-51A 43-6251 belonged to a technical school after World War Two and was acquired by the museum in the 1950s.

The Hughes H-4 Hercules has at last been moved by barge across the harbour at Long Beach, California, into its new aluminium display dome alongside the liner Queen Mary. It is now in the care of the Wrather Corporation of California.

The 1918 Fokker DVII was purchased by Fokker at the Wings and Wheels auction at Orlando, Florida (Grapevine, February 1982). One of only seven surviving originals, it was transported to Holland on the container ship Consumer and will be restored to its former glory by Fokker employees before being “promi­nently exhibited”. Between the wars this machine flew in air races and served as a camera ship for Howard Hughes’s 1927 classic movie Hell’s Angels. Ten years later it starred in Men With Wings. Restored in 1955, it joined the Wings and Wheels collection in 1970.

The picture was taken on January 9, 1969, from the Royal Navy Heron XR444 en route from RNAS Culdrose to RAF Northolt. 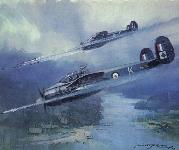