Two Mangustas at Bolzano ready to take off for a training mission in the Alps in preparation of an Afghan deployment.

The sleek and small silhouette of the Mangusta is highlighted in this frontal shot. Note the asymmetric configuration with a fuel tank on the right and a TOW twin launcher on the left.

A pair of Mangustas in flight in Alpine valleys during preparation for an Afghan deployment.

An A129C firing a salvo of flares with the SIAP system.

An A129C from Task Force 'Fenice' at Herat in 2011, before taking off for an escort mission.

A Mangusta at a forward arming and refuelling point (FARR) in ‘the middle of nowhere' in Afghanistan.

An A129C at take-off. Note the compact dimensions of the helicopter.

Two A129Cs in flight over Afghanistan. They are in full combat long-range configuration - with the M197 chin gun loaded, external fuel tanks, full self-defence suite including SIAP and other systems and IR suppressors at the engine exhausts.

Pilots and technicians around an A129C after a training mission in an Alpine environment.

An AH-1Z Viper from Marine Medium Helicopter Squadron 364 hovers above the flight deck of the USS Peleliu during an interoperability training exercise off the coast of Southern California.

Sailors prepare to fuel a AH-1Z Viper on the flight deck of the USS Peleliu.

An Aviation Boatswain's Mate guides an AH-1Z Viper off the flight deck of the USS New Orleans during flight quarters.

The AH-1Z is armed with a three barreled M197 20mm cannon with a firing rate of 730 rounds per minute.

The first Ka-52 prototype undergoing ship compatibility trials from the deck of the anti-submarine warfare ship Admiral Kulakov underway in the Barents Sea. 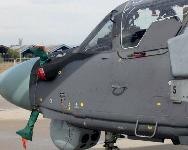 The Ka-52 cockpit is protected by two layers of steel armour on the fuselage and armour plates on the sides of the canopy.

The two-seat Ka-52 is the most advanced of the three attack rotorcraft types entering service with the RAA.

The Ka-52 fuselage is built around a steel torsion box beam, onto which the gearbox, cockpit section, tail section, engines, main landing gear legs and the cannon are attached. The wing centre section passes though the box.

By mid-2013 Ka-52s were in service with two RAA front line units at Chernigovka (575th Air Base) and Korenovsk (393rd Air Base), and the combat training centre at Torzhok. This example is painted in the new standard overall grey camouflage.

The black areas of the fuselage skin seen on this pre-production series Ka-52 are made of composite material. 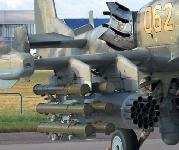 The Ataka-V ATOM, carried on a six-tube launcher rack is one of two types of guided missile cleared for use by the Ka-52.

The Ka-52 cockpit is equipped with dual controls and the left-seat pilot also has an ILS-31 head-up display for piloting and employing the forward-firing weapons. 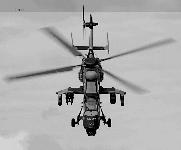 The Tiger ARH uses 70mm FZ unguided rockets in either seven (pictured) or 19-tube launcher pods. Consideration is being given to upgrading them with precision guidance kits such as Lockheed Martin's DACR.

Australia's Tigers are based on the French HAP variant but operate in the Armed Reconnaissance Helicopter role.

Although the power generated by the two MTR 390 engines in considered adequate, Australia is considering switching to the more powerful MTR 390E during future upgrades.

Australian Aerospace is a Eurocopter subsidiary and assembled 20 of the 22 Tigers delivered to the Australian Army. 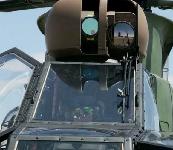 A laser designator has been incorporated into the Strix sight to designate targets for the AGM-114M Hellfire missiles used by Australian Tigers.

The digital Lockheed Martin M299 launcher is capable of hosting a number of weapons, making any future upgrade of the unguided rockets a relatively straight forward process. Two Hellfire training rounds are pictured on this Tigers inner pylon, with a seven-tube FZ launcher pod on the outer station.

The first two Tigers are escorted by soldiers in the World War One uniforms of Australia's Light Horse regiment during the delivery ceremony in December 2005.

The front cockpit of the Tiger ARH is occupied by the pilot.

In Australian service the rear seat occupant is designated the Battle Captain who is also a Tiger pilot.

The TopOwl HMSD is now in the latest configuration 3 form, which improves night vision acuity and is used on all flights.

This Z-10 features a new-style sensor suite with a drum-shaped targeting system and pilot night vision sensor assembly, housed in a ball turret above the nose.

A four-ship of Z-10s in close 'front' formation. The helicopters are in the initial production configuration with the old-style sensor suite. The machine nearest the camera carries additional fuel tanks and rockets while the next is armed with the KD-10 anti-tank missile.

No fewer than 60 Z-10s are now in service with the Chinese People's Liberation Army Air Force, the main battlefield support force for use in joint operations.