LONDON - CAPE TOWN - LONDON: Some "snaps" taken by A. B. Elliott (the engineer of the party) on the outward journey. (1) The arrival at Malakal, Sudan. (2) A native helps to fill up with fuel. (3) An aerial view of the Sennar Dam recently opened to irrigate 1,000,000 acres of desert. 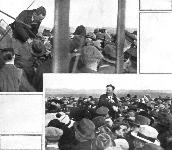 FIRST GREETINGS: These two photographs show the crowds surging around the machine as soon as it came to a standstill on the Croydon Aerodrome. In the upper photograph, Mr. Cobham is being hailed by friends, while in the lower picture he is seen being carried to the Customs House.

THE MACHINE: The D.H.50 in front of the hangars at Croydon, just before starting on its last "flip'' across to the Stag Lane Aerodrome. Both the machine and its Armstrong-Siddeley "Jaguar" engine were in very good condition, considering the trying conditions under which the 17,000 miles' flight was made. 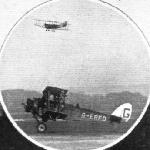 HOME FROM THE CAPE: These three photographs tell the story of the home-coming of Cobham, Elliott and Emmott on Saturday of last week from their flight to Cape Town and back in a D.H.50 fitted with Armstrong-Siddeley "Jaguar" radial air-cooled engine. On the photograph is seen the "50" actually landing after its 17,000 miles' flight.

EXAMINING THE ESCORTS: Visitors surround the D.H. "Moths," six of which went out to meet Cobham over Sevenoaks, one of them, piloted by Capt. Geoffrey de Havilland, carrying Mrs. Cobham. Owing to poor visibility, the "Moths" failed to get close to Cobham's machine, and arrived back at Croydon some little time after Cobham had landed.

THE "CYGNET'S" BIG BROTHER: In spite of its powerful "Condor" engine, Mr. Bulman handles the Hawker "Horsley" as if it were a light 'plane, as these photographs show, and in his hands the manoeuvrability of the machine is extremely good.

A MODERN DAY-BOMBER: The Hawker "Horsley" is fitted with a Rolls-Royce "Condor" Engine of 650 h.p. The machine, it will be seen, is of very "clean" design, and is characterised by a bottom plane considerably smaller in span and chord than the top plane. The cowling around the engine is particularly neat.

AT FULL SPEED: The Hawker "Horsley" with Rolls-Royce "Condor" engine, piloted by Flight-Lieut. Bulman, flying past the hangars at Brooklands. The inset shows the machine at the top of a loop, an evolution which this astonishing machine seems to perform with the greatest ease.

THE BRISTOL "JUPITER" ENDURANCE TEST: Our photo shows the Bristol "Bloodhound" biplane fitted with a sealed "Jupiter" engine, arriving at Croydon, from Filton, on February 25. Since January 4, when the test started, the machine has been making daily trips between these two points, and no engine replacements have yet been made so far. On Tuesday over 200 hours' flying had been completed and over 22,500 miles flown.

CONVERTED F5 FLYING BOAT: A couple of years ago Short Brothers built this machine for Mr. Lebbeus Hordern of Australia for his private use, and the machine has'done good service as an aerial yacht. Mr. Hordern has now ordered the small all-metal flying boat.

THE SHORT "MUSSEL": This photograph of the stern of the fuselage shows the neat attachment of the fin and stern post to a Duralumin plate forming the rear bulkhead of the fuselage. Note the steel fittings under and on the sides of the stern, which are for the tail skid and tail plane struts respectively. The skid is, of course, for use with the landplane only.

The Short "Mussel": A view of the fuselage, showing the skeleton of the vertical fin.

THE SHORT "MUSSEL": The neat mounting of the "Cirrus" engine is well brought out in this photograph. The gravity petrol tank may be seen above and aft of the engine.

THE SHORT "MUSSEL": Some constructional details. 1, shows a spar section, and also the attachment of an aileron bracket. In 2 is seen an external view of a spar, with the built-up sheet steel fitting which takes one of the lift struts. The latter are placed above the wing, and are thus compression struts. The steel fitting is shown in more detail in 3. A spar root is illustrated in 4. Note the gimbal mounting. In 5 is shown the spar root, built into the lower part of the fuselage, which, in addition to receiving the wing, also supports the undercarriage strut. 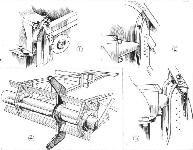 THE SHORT "MUSSEL": 1, 2 and 3 show details of the very neat engine mounting, the cone-shaped "feet" being bolted to the channel-section formers and secured by bolts projecting through the fuselage covering and readily accessible from outside. Taken in conjunction with the photograph showing the "Cirrus" engine, these sketches clearly explain the simple mounting. In 4 are shown details of the aileron construction, which incorporates wooden ribs attached to a Duralumin tubular spar by the small Duralumin sheet fittings shown.

BEACHING CHASSIS OF SUPERMARINE "SOUTHAMPTON." On the left the chassis is shown in the down position, while on the right it is shown at the top of its travel. .

THE "NIMBUS" IN FLIGHT: Mr. Perry flying past the A.D.C. Aircraft works at Croydon Aerodrome, on a D.H.9 fitted with the "Nimbus" engine. Inset, the machine is shown at the top of a loop. With this engine the speed of the D.H.9 3-seater is about 135 m.p.h.

The Bristol "Berkeley" is a Day-Bomber with Rolls-Royce "Condor" Engine. The machine is built entirely of metal, with novel forms of steel construction for main members and Duralumin for minor parts. 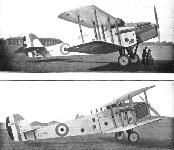 The Bristol "Berkeley" is a day bomber fitted with Rolls-Royce "Condor" Engine. The machine is of all-metal construction, with steel as the material used for the main structure members and Duralumin for minor parts. For the Bristol-Frise patented balanced ailerons it is claimed that they introduce no yaw to interfere with the sighting of the bomber. The pilot's cockpit is placed ahead of the wings, where his view is particularly good.