A D.H.50 FOR NEW ZEALAND: This machine has been ordered for survey work, the cabin being specially arranged for the taking of photographs. Our picture shows the 50 on a test flight, piloted by Captain Broad, shortly before its despatch to the Antipodes. In the background is seen a "Moth," piloted by Capt. Geoffrey de Havilland himself.

A D.H.50 FOR NEW ZEALAND: This machine has been ordered for survey work, the cabin being specially arranged for the taking of photographs. Our picture shows the 50 on a test flight, piloted by Captain Broad, shortly before its despatch to the Antipodes. In the background is seen a "Moth," piloted by Capt. Geoffrey de Havilland himself.

DISFIGURATION: At the last House Dinner of the Royal Aero Club, Mr. C. R. Fairey referred to the manner in which the lines of an aeroplane are spoiled by registration letters. These two photographs rather bear out Mr. Fairey's contention. A motor car with registration letters "as large as the surface will permit" would probably not be easy to sell.

FLYING IN 1909 AND STILL GOING STRONG: Capt. Geoffrey de Havilland, one of our pioneer designers and pilots, still flies whenever there is an opportunity. He is here seen on one of the "Moths," having a look at the recent snow from above.

Blackburns in Greece: Our photograph shows one of the five Blackburn "Velos" seaplanes recently tested by Major H. S. Travers, D.S.C., before delivery to the Greek Government. It is the production of the National Aircraft Factory near Athens, organised by the Blackburn Aeroplane Co., and is a development of the Blackburn "Dart" and "Swift" machines, being a 2-seater torpedo-carrying seaplane, fitted with a Napier "Lion."

THE FORD AERIAL "FLIVVER.": Henry Ford's experimental version of the popular "Flyabout." It is fitted with a 35 h.p. Anzani.

RACING INFLUENCE: These two views of the "Gloster Gorcock," with Napier Aero Engine, illustrate the effect which experience in the design of racing aeroplanes has on design of service types. In the upper photograph the machine is actually flying, about one foot off the ground. Concerning the lower picture, all we need say is that our photographer is still with us.

THE "GLOSTER GORCOCK": Three-quarter front view. Note the clean nose and careful streamlining generally. The engine is a Napier "Lion"

THE "GLOSTER GORCOCK" in action, piloted by Flying Officer H. J. T. Saint, D.S.C. This machine is one of the fastest single-seater fighters in the world.

THE "GLOSTER GORCOCK": Side View. The family likeness to "Gloster" racing aircraft is obvious 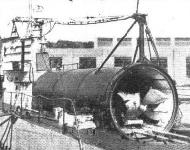 AN AMERICAN SUBMARINE SEAPLANE CARRIER: This tubular hangar, containing a small seaplane scout (the S.1) neatly stowed away, is carried on the deck of a submarine, and it does not take very long to open the ''tube" door, remove and erect the seaplane ready for flight.

THE FOKKER B.III FLYING BOAT: Another view of the "Lion"-engined machine in flight.

The Fokker B.III Flying Boat: A recent production from the Dutch Fokker factory. It is fitted with a Napier "Lion," and has a metal hull.