In 1956 Boeing B-47 Stratojet 51-2059 was lent to the RCAF for trials at Canadair with the Orenda Iroquois engine, the aircraft being redesignated CL-52. The engine was mounted on the starboard rear fuselage and tested, although its position was far from ideal. After some 35hr of Iroquois test-flying the B-47 was returned to the USA, becoming the only example of the type to see foreign service.

The Arrow’s low-slung nose-high attitude while on the ground giving it the appearance of a tiger on a frayed leash, the prototype, RL201, is seen here at Malton Airport, north-west of Toronto, in 1958. 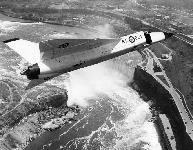 The Arrow prototype makes a pass over Niagara Falls during its test programme. A number of the systems adopted for the aircraft proved to be innovative; the Arrow’s 4,000lb/in2 hydraulic system, for example, was highly advanced and nothing equivalent to it would be developed until the advent of Rockwell’s B-1 bomber in the 1970s.

This photograph of the Arrow at Malton from a low angle emphasises the sheer size and clean lines of the new interceptor. The first two prototypes were fitted with a pair of Pratt & Whitney J75 engines, with a view to two far superior Orenda Iroquois powerplants being fitted to production examples.

What might have been; the author’s depiction of a late afternoon sortie by a pair of Arrows over the western USA includes a USAF variant and an RAF Arrow painted in the colours of the Binbrook Target Facilities Flight.

One of the many endlessly fascinating digital illustrations created by ERIK SIMONSEN for his Crecy book Project Terminated: Famous Military Aircraft Cancellations of the Cold War and What Might Have Been, this shows Avro Canada CF-105 Arrows Nos 213 and 204 climbing in formation with full afterburner high over Canada. Although a formation flight of the two prototypes, 201 and 202, was planned several times, it never actually took place. 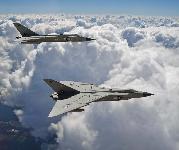 The author’s conceptual view of a pair of RAF Arrows, carrying droptanks, up from RAF Coltishall while serving with No 226 Operational Conversion Unit/No 145 (Shadow) Sqn circa 1968. Had the initial talks undertaken by Great Britain and Canada formulated an agreement, the type may well have been procured for RAF service.