The Avro 621 "Tutor" and the Autogiro of Sir Alan's Circus flying in typical Cape Town scenery.

ACCURACY: No. 25 F.S. in squadron formation with nights in line abreast.

SQUADRON "V": No. 25 (Fighter) Squadron can fly their "Furies" in any formation.

The Westland "Wapiti" has widely been used by the R.A.F. for photographic duties in many parts of the Empire.

The Avro 621 "Tutor" and the Autogiro of Sir Alan's Circus flying in typical Cape Town scenery.

BREAKING NEW GROUND: In the design of the new Fairey night bomber (two Rolls-Royce "Kestrel") every effort has been made to achieve aerodynamic efficiency, and for the first time in the history of British aviation a night bomber has been produced as a cantilever monoplane. The size of the machine may be gauged from that of the visible crew. When these photographs were taken the machine was piloted by Flt. Lt. Staniland, Fairey's Chief Test Pilot. 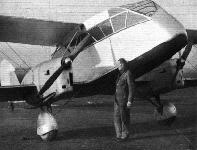 THE DE HAVILLAND "DRAGON": This view of the nose and engines illustrates the good view obtained by the pilot, and the careful fairing of the "Gipsy Major" engines. The undercarriage is of low drag. 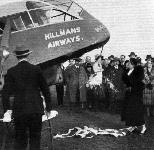 ZONK! Our photographer catches Amy in the act of wasting precious champagne. She excused her action by naming the first Hillman's Airways "Dragon" - Maylands.

TRULY COMMERCIAL: This, the first D.H. "Dragon," has been added to the fleet of machines used by Mr. Hillman at his aerodrome at Romford. Its capacious cabin should make it a paying proposition for commercial operation.

THE DE HAVILLAND "DRAGON": This photograph gives a good idea of the appearance of the new machine. The identification number E.9 is a trade registration, and indicates that the machine is still experimental. Since these photographs were taken the "Dragon" has been undergoing official tests at Martlesham.

W/SPAN^2: Reduction of induced drag has been aimed at by using wings of large span, giving low span loading.

SOME STRUCTURAL DETAILS OF THE D.H.84 ("DRAGON"): As the machine is of very simple and straightforward construction generally, the greatest interest centres around the steel tube structures carrying the engines and petrol tanks. The sketch shows the part of these which can be regarded as being part of the wing structure.

SOME STRUCTURAL DETAILS OF THE D.H.84 ("DRAGON"): The details being more clearly shown in the small sketches.

HOME FROM THE CAPE: Mrs. J. A. Mollison landing at Croydon in her "Puss Moth" "Desert Cloud" on December 18.

The Bert Hinkler's de Havilland "Puss Moth" on which he flew from New York to South America, across the South Atlantic, and from West Africa back to England.

It would be difficult to show, in one drawing, a greater number of details than those which Mr. Max A. Millar has included in this part-sectioned view of Mrs. Mollison's "Puss Moth" "Desert Cloud." The equipment differs considerably from that of Hinkler's machine.

COMPRESSION-IGNITION: Two views of the Rolls-Royce "Condor" installed in a Hawker "Horsley." Test flights are about to commence.

THE SHORES OF SHEPPEY: Three Armstrong-Whitworth "Atlases" of Oxford University Air Squadron out on the prowl.

The "B.2" being unloaded from the ex-rum runner "Fayal" and slung into the barge in which it made the journey down the Tagus to the seaplane base.

The Blackburn "B.2" Trainer taking off from the football field en route for Cintra.

FOR REPAIR AND MAINTENANCE: The well-equipped workshops at Hanworth (now under the charge of Capt. E. D. Ayre) have been increasingly busy lately overhauling aircraft for C's. of A. and on general repair work.
G-AAOB - Blackburn Bluebird IV; G-AASG - DH.60G Gipsy Moth

SAYING HELLO! TO THE PEAKS: New low-wing, all-metal, twin-engined Boeing bomber caught against the impressive background of Mount Rainier, 14,408 ft. above sea level. Seven of these planes, hailed as the fastest of their type in the world, are being built for the U.S. Army Air Corps by the Boeing Airplane Company of Seattle.

AN UNSUCCESSFUL RIVAL: Mr. Victor Smith, the young South African airman sets out from Croydon on December 15 to beat Mrs. Mollison's Cape record. He had hard luck, however, and was forced down at St. Malo, while, when taking off for England on December 16, he crashed, damaging his Comper "Swift," but fortunately without hurt to himself.

THE CIRCUS AT THE CAPE: The D.H. 66 lands, apparently in rough ground, at the Cape Airport. Actually, the surface of the aerodrome is quite smooth.

THE CIRCUS AT THE CAPE: Six of Sir Alan Cobham's machines flying in formation, led by the D.H.66, over Cape Town. 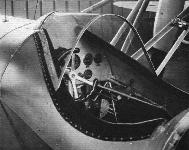 THE PILOT'S COCKPIT: The instrument equipment is unusually extensive. Below and to the right of the wheel can be seen the oil temperature control handle.

MONOSPAR CARRIES BOURBON PRINCE: Seated on the right of Capt. R. Stocken in the Monospar, is Prince Sixte de Bourbon-Parme, who, accompanied by Le Comte de Beam (in rear seat) returned to Paris in this machine on December 22, after lecturing before the Royal Geographical Society in London.

LONDON'S NEWEST AIRPORT: A Monospar and two "Moths" arriving above the recently opened aerodrome and seaplane base at Gravesend.

THE HULL OF THE BB.1: Sides and bottom were assembled as units and then welded to the frames and stringers. The latter are of U-section. Watertight joints were obtained by running solder into the gaps between welds.

SHOT-WELDED ENTIRELY IN STAINLESS STEEL: The BB.1 Amphibian in skeleton. The machine is coming to this country shortly.

A NEW "SPARTAN" TWO-SEATER: This little machine has been built as a "full-scale" experiment, carried out as cheaply as possible, in order to provide the fullest possible information before going into production. The machine will be flown strenuously for a time so as to make sure that when, later on, production is started, there shall be no "snags." It is a side-by-side two-seater, fitted with Pobjoy "R" engine, and the fuselage of the experimental machine is of plywood construction, while the wings are the outer portions of the Stieger Monospar S.T.4. The first test flights, carried out by Col. Strange, Capt. Scott and Mr. Ash on Wednesday of last week, were entirely successful. The loaded weight with pilot, passenger, luggage, and three hours' fuel is 1,300 lb. The machine was designed by Mr. H. E. Broadsmith.

LONDON'S NEWEST AIRPORT: A Monospar and two "Moths" arriving above the recently opened aerodrome and seaplane base at Gravesend.

FROM KUALA LUMPUR: Mr. J. R. Hibert warms up his "Gipsy" engine prior to his departure from the Kuala Lumpur Flying Club's aerodrome for Singapore during his recent flight from Heston to Australia.

FOR REPAIR AND MAINTENANCE: The well-equipped workshops at Hanworth (now under the charge of Capt. E. D. Ayre) have been increasingly busy lately overhauling aircraft for C's. of A. and on general repair work.
G-AAOB - Blackburn Bluebird IV; G-AASG - DH.60G Gipsy Moth

FALLING SAFELY: Mr. Raymond Quilter, who makes the "G-Q" parachute, especially designed for private owners, is here seen making a drop for test purposes, from one of the Brooklands Flying School "Moths." Note the left hand raised to adjust his goggles and the position of the body which will allow the chute to clear the legs.

THE LIORE & OLIVIER AUTOGIRO (POBJOY "R" ENGINE): This sketch by Jean Gaudefroy, reproduced by courtesy of our French contemporary "L'Aeronautique," shows most of the structural details. The fore-and-aft control is guided by the curved rail A, and can be locked in any position by the knurled knob B. It was through taking the machine off with the control locked that the fatal crash occurred.