Another photograph of Mario de Bernardi and engineer Giovanni Pedace aloft in the first prototype. Campini explained after the aircraft’s arrival that “high speed was not the object of this first public flight”, which was just as well as it managed an average speed of only 135 m.p.h. over the 295 miles between Taliedo and Guidonia.

The C.C.2 at Guidonia, with its c/n, 4849, and serial, MM.487, on the rear fuselage. When the airfield was overrun by the Allies, it was found dismantled with components scattered among the demolished remains of the once-busy Experimental Establishment.

The interior of one of the two C.C.2 prototypes at Taliedo.

The two C.C.2s nearing completion in their adjacent jigs in the Caproni workshop at Taliedo. Both went on to undergo extensive ground testing, and both undertook flight testing. Given the Caproni construction numbers 4849 (No 1) and 4850 (No 2), they were later given the military experimental serials MM.487 and MM.488 respectively. 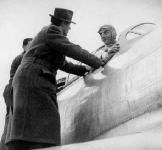 Secondo Campini (in hat and overcoat) gives last-minute instructions to test pilot Mario de Bernardi before a test flight of one of the C.C.2s. One of Italy’s most distinguished aviators, de Bernardi chalked up many of the nation’s aeronautical achievements. In 1959, aged 65, he suffered a heart attack while flying an aerobatic routine in Rome; he managed to land the aircraft but died shortly afterwards.

The coloured fasces on the fuselage, later replaced by a stylised black variant, suggests this is the second prototype, possibly during its initial taxying tests on August 8, 1940. This aircraft made its first flight on August 27 the same year, to become the world’s first two-seat jet-powered aircraft to fly.

The fuselage was of conventional construction, made up of a cylindrical structure of 62in (157-5cm) outer diameter at its widest point, within which was fitted an inner skinning of 56in (142-25cm) diameter, according to later Allied measurements.

The first Campini-Caproni C.C.2 undergoing static testing at the Caproni factory at Taliedo. The entire rear of the aircraft could be removed to enable inspection of the effect of fuel burning in the annular mixing channel.

With the nose intake section removed, the C.C.2 reveals its three-stage axial-fan assembly. Despite the Italian Air Ministry and Caproni having spent a combined total of nearly 16m lire over eight years on the project, Pickles said it “did not merit serious attention”.

Giovanni Pedace (left) and Mario de Bernardi in the cockpits of the first C.C.2 in November 1941, when they made the Taliedo-Guidonia flight.

The static test fuselage outside the workshop at Taliedo in 1937. The fuselage comprised four main sections: the air intake in the nose; the three-stage ducted fan unit; the main section housing a circular coolant radiator, Isotta-Fraschini engine and “afterburning” equipment, and the tail section with adjustable ‘‘bullet’’.

One of the few air-to-air photographs taken of the type, this possibly shows the first prototype, c/n 4849, during its flight from Taliedo to Guidonia in November 1941. Note that the cockpit canopies remain open - most Italian aviators of the time disliked enclosed cockpits.
The Caproni-Campini N.I was, chronologically, the world's second jet aircraft to fly, this feat taking place at Milan on 27 August 1940, one year and three days after the He 178's maiden flight. On paper, the N.l's propulsion system embodied several very advanced concepts, including an afterburning, high by-pass turbofan. What it turned out to be was a 'Mickey Mouse' compound contraption of a 900hp Isotta-Fraschini driving a ducted fan, with a fuel-guzzling afterburning combustor ring thrown in. The overall result of this means of propulsion can be determined from the machine's top level speed of 205mph at 9,800 feet, increased by a mere 28mph at the same altitude with afterburner working. Some indication of fuel consumption can be gleaned from the fact that the machine had to alight at Pisa for fuel while making a 169-mile cross-country flight between Milan and Rome. Testing of the N.I ceased in the spring of 1941.

The first C.C.2, serialled MM.487, at Guidonia before Italy’s capitulation in September 1943. In his official intelligence report for Mediterranean Allied Air Forces after his visit in June 1944, Sqn Ldr F.E. Pickles noted that “the Experimental Establishment at Guidonia is completely demolished” and that Campini had moved his workshops to northern Italy.

The first C.C.2 following its forced landing on April 9, 1942. The damage was restricted to the tailwheel and its fairing, parts of the rear fuselage and one wing rib in the undercarriage recess. A valve in the port wheel-retracting gear had seized owing to dry packing leathers.