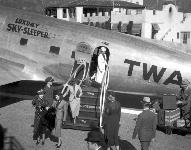 The goal - TWA’s Jack Frye was determined to provide the best possible service, both in terms of passenger experience and economic viability.

The DC-1, displaying its record-setter status, is prepared for another research flight

A photograph in the September 1935 issue of Trade Winds magazine showing the oxygen masks Tomlinson and the DC-1 crew wore on the Kansas City-Newark flight of September 5 that year.

The Boeing Model 307 Stratoliner was the world’s first pressurised airliner and could cruise at 20,000ft, substantially higher than the previous generation of airliners. Introduced into TWA service in July 1940, the Stratoliner represented the application of the lessons learned from Tomlinson’s pioneering research flights in the DC-1 and Gamma

Tomlinson wearing one of several oxygen masks he tested while flying the Gamma. 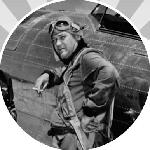 Pioneer high-altitude pilot Daniel W. "Tommy” Tomlinson beside the Northrop Gamma in which he conducted numerous invaluable research flights during 1936-37.

This side view of the Gamma clearly shows the rectangular turbocharger installation on the port side of the engine cowling. Despite the type’s chronic shortcomings in terms of the view from the cockpit, the Gamma was classically brawny in the American tradition, and was reportedly much-loved by its pilots, who found it strong and steady.

The starboard side of the Gamma’s fuselage incorporated the heating duct from the engine to the observer’s compartment and cockpit. Note also the direction-finding radio loop on the forward fuselage and the spinner for the three-bladed propeller.

Tomlinson shares a smoke with fellow TWA pilot Frank Busch, who later became the airline’s General Manager of Operations and Vice-President of Flight Operations. Smoking around aircraft was clearly not an issue at the time! Note the legend on the Gamma’s fuselage, which reads ‘‘Overweather Experimental Laboratory”.

Gamma 2D использовался для экспериментов на больших высотах, чтобы выяснить возможность авиалайнеров обходить грозовые фронты.
Northrop 2D Gamma NC13758 before its modification for use in Tomlinson’s high-altitude research programme. All three examples of the 2D Gamma were purchased by TWA for a high-speed mail service that never fully materialised in the wake of the 1934 Air Mail Emergency, when the US Army took over the transport of the nation’s air mail - temporarily, as it turned out.