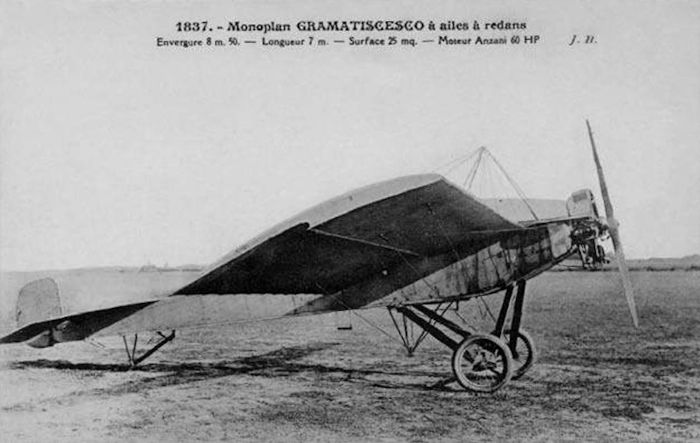 A 1914 French postcard of the “Gramatiscesco” monoplane. Note the curious aerofoil section.

While I can't answer Philip Jarrett's question regarding which of the two pilots had flown the "Gramatescue" (Lost & Found, TAH29), I can provide a little more detail regarding the aircraft and designer.
The designer was named George Gramaticesco, with a final "o" and not "u", as shown on the postcard image of the monoplane and in patents.
Gramaticesco patented his aerofoil design in Britain, France, Switzerland and Germany between 1912 and 1914 based on the theory that the separation of the airflow at the discontinuity would cause it to impact on the following section, or secondary wing behind (see cleaned-up patent illustration here - Ed.], thus enhancing lift. He may have been mistaken!
Ralph Pegram Fleet, Hampshire
<<   0/0   >>