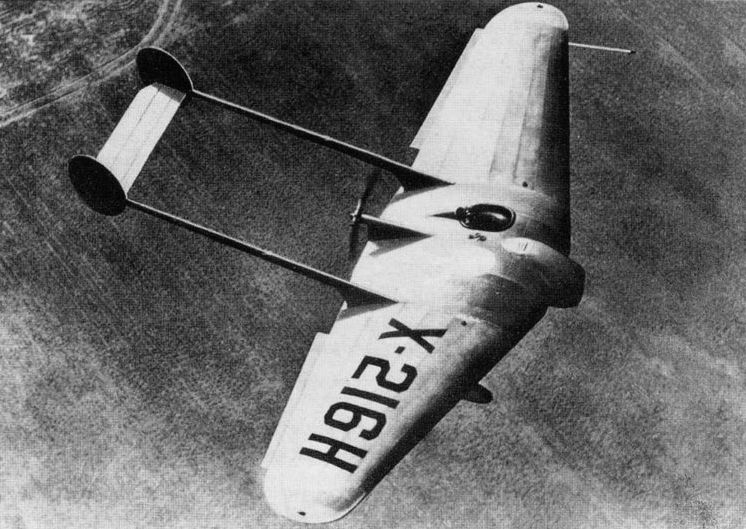 BUILT as a "flying model" for collecting test data for the design of a larger machine, the little two-seater monoplane illustrated herewith was designed by Mr. Northrop, of the Northrop Aircraft Corporation, of Burbank, California, U.S.A. and has already undergone its preliminary flying tests, although further tests are still being made.
The "all-wing" aeroplane is not, of course, new. Professor Junkers, as long ago as 1910, took out a patent on a machine of the "nur flugel" type, and the subject has engaged the attention and taxed the ingenuity of designers ever since. It is a well-known fact that aerofoils, tested by themselves, may have maximum L/D ratios as high as 25 : 1. The most efficient aeroplane ever produced falls very far short of this, due to the resistance of all such items as fuselage undercarriage and tail surfaces. Obviously if all these items could be suppressed, the efficiency of the aircraft would be that of the wing itself, an improvement in efficiency which could either be used for getting greater speed out of a machine with the same power, or for more economical power expenditure for a given weight, or for any combination of the two desiderata. It is, however, an unfortunate fact that the normal aeroplane wing, as built in the usual sizes of machine, gives no room for passengers or freight, and it is also somewhat unfortunate that aerofoils which are naturally stable do not exhibit high values of the ratio L/D. Consequently we add fuselages to our wings to contain the useful load, and tail surfaces to stabilise the wing.
The new Junkers G.38 goes some way towards the "all-wing" machine, but it still has both a fuselage and a tail. Mr. Northrop has not chosen to wait until he can build a very large machine in which, through sheer size, the wing is deep enough to contain the crew. He has followed somewhat the example set in the Remington-Burnelli machine by having the centre-section of the wing very thick - deep enough, in fact, to enclose the crew, and has then attached to the sides of this thick centre-section a wing of more or less orthodox design. The Northrop machine, however, departs from the Burnelli in that the monoplane wings are faired into the centre-section, and the latter does not extend back to the tail but stops short at the wing trailing edge, the tail being carried on two slender tail booms.
The Northrop monoplane here illustrated is a "flying model" in two ways: For collecting data that can later be applied to a larger machine, and for testing in actual flight a new form of construction, in which the smooth skin of the wing carries most of the wing loads. As far as can be gathered the small machine has proved the success of both the aerodynamic and the structural features which it was desired to test. Concerning the latter, it may be stated that recently a monoplane of orthodox aerodynamic design was completed by the company, employing the stressed-skin type of wing construction. That machine is, apparently, satisfactory from a structural point of view.
As regards the aerodynamic design of the small two-seater, we regret that no very detailed data are available, but the Northrop Corporation states that the machine has "a top speed of approximately 25 per cent, better than any other design of like power and capacity." This would appear to indicate that the drag of the Northrop "all-wing" monoplane is about 65 per cent, of the drag of an orthodox machine of the same wing loading and power loading. This is an improvement which is not to be sneered at. Unfortunately it is not stated whether this improved speed figure relates to the machine with undercarriage retracted or exposed. It is assumed to refer to the former, as there does not appear to be cause to believe that the drag with undercarriage exposed could be so much lower than the drag of an orthodox machine.
Apart from the unusual lay-out of the wing and centre-section, the machine is mainly remarkable for the three-wheeled undercarriage, and for the unusual engine and propeller arrangement. The engine, an inverted "Cirrus," is mounted in the leading edge, and an air tunnel extends from the scoop in the cowling through the wing to an exit in the under surface, near the trailing edge. The cooling is reported to be excellent. Arrangements have been made for testing the machine both as a pusher and as a tractor. In either case the engine is in the nose, but the "pusher" airscrew is driven via a long shaft passing between the two cockpits.
The three-wheel undercarriage is placed with two wheels in front and one centrally behind, the weight carried by each being approximately equal. One is somewhat puzzled as to how the machine is got off with this arrangement. A retractable undercarriage was tested in flight, but afterwards a permanent chassis was used for further performance tests.
It is stated that although the tail booms are slender and somewhat flexible, no trouble with tail flutter has been encountered.
The view from the cockpits cannot be described as good, but as the machine is not intended as a light 'plane, but as a flying model of a larger machine, in which the pilot would be differently placed, this criticism is of no real importance.
The Northrop monoplane has a wing span of 30 ft. 6 in. and a length of 20 ft. The wing area is 184 sq. ft., and the maximum wing thickness 34 in. The gross weight is 1,600 lb. No performance figures are available. 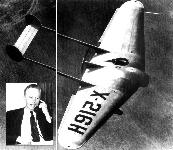 "Крыло" - первый самолет фирмы Нортроп
Inset: Born in 1895, John Knudson 'Jack' Northrop migrated with his family from the US east coast to California in 1904 and it was here, in 1916, that Jack Northrop joined the Loughead Brothers, later to become Lockheed. By 1919, Jack Northrop had designed his first aircraft, the Loughead S-I, a smart looking sports biplane. The big problem with the S-l was its $2,500 price tag, at a time when war-surplus Curtiss JNs were selling for $400, which helps explain why the Loughead concern went out of business in 1920. After a three-year break from aviation, Jack joined the Douglas Company in 1923, rejoining the reformed Lockheed, as it then was, in 1927. It was at this time that Jack Northrop designed the famed Lockheed Vega, but, restless to set up his own company, left in 1928, aided by Ken Jay, to establish the Avion Corporation. It was while heading Avion that Jack Northrop developed the all-metal, multi-cellular sparred wing that was later to serve the Douglas DC series so well. Others of Jack's designs at this time included the beautiful Alpha single-engined, low wing monoplane and the so-called Flying Wing. In the wake of the Great Depression, Avion was absorbed into Stearman during 1932 and Jack went into partnership with Donald Douglas to form the Northrop arm of Douglas between 1932 and 1938, which became the El Segundo Division of Douglas when Jack left to once more attempt to go it alone. Establishing the present Northrop, now Northrop Grumman, in August 1939. Jack was to produce not only his series of flying wings, but also such formidable all-weather fighters as the P-61 Black Widow and F-89 Scorpion. Jack Northrop retired in 1952 and, shortly before his death in 1981, was invited back to the company he had founded to be shown details of the Northrop B-2 stealth flying wing bomber ordered by the US Air Force in late 1980.
Main image: Not quite, but a clear pointer to the family of flying wings that Jack Northrop would devote so much of his latter years to developing, the so-called Avion Flying Wing of 1929. A half-way stage between the aerodynamically clean, but otherwise conventional Lockheed Vega that Northrop had designed in 1927 and the as yet to be conceived series of 1940s flying wings, this purely experimental type, registered as X-216H. was powered by a 90hp flat four Menasco and was flown first as a pusher, then as a tractor-engined machine on numerous occasions in the period 1929-1930. 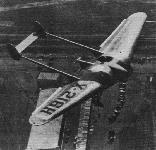 The Northrop "All-Wing" monoplane (pusher version) in flight. One cockpit covered in.

THE NORTHROP "ALL-WING" MONOPLANE: This front view of the "pusher" version illustrates very clearly the tapering of the thick centre-section into the wings proper, and also shows the three-wheeled undercarriage. 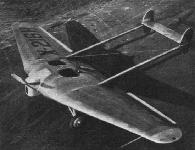 View from above of the Northrop Monoplane. This photograph shows the machine fitted with tractor airscrew.