THE "V.I." is the first machine to be produced by the Airplane Development Corporation of Glendale, California. This Corporation is a subsidiary of the Cord Corporation, of Chicago, which, with Mr. E. L. Cord as President, operates the Stinson Aircraft Corporation, Lycoming Motors, the Auburn Automobile Co., and several other engineering firms. About two years ago, when the demand for very fast transport aircraft was first heard in the U.S.A., Mr. Cord secured the services of Mr. Gerard Vultee, who for several years was chief engineer of the Lockheed Aircraft Co. Designed and constructed at the Grand Central Air Terminal at Glendale, California, the machine made its first test flights about a year ago, and recently ten machines of similar type were ordered by American Airways.
The aircraft is an all-metal, single-engined, nine-seater, low-wing, cantilever monoplane, with retractable undercarriage. The wing, which is tapered both in plan form and thickness, is in three parts, the centre section, which is built integrally with the fuselage, and two outer sections which are bolted to the centre section. The structure of the wing is of the "shell" type, and is claimed to be very rigid in torsion. A smooth outer covering of Alclad sheet is attached to longitudinal corrugations which run the entire length of the wing. A removable panel on the under surface of the wing affords ready access to the interior for inspection and repair. Ailerons of high aspect ratio statically balanced about their hinge axis to eliminate flutter are fitted.
The fuselage of metal monocoque structure is oval, having no longitudinal bracing. Alclad sheet covering is used, composed of overlapping riveted panels. As the panels are relatively short in proportion to the total length in the fuselage, it is not necessary to "form" the sheeting. It is possible to remove one or more of the panels from the fuselage by drilling out the rivets. These panels may be flattened out, and, using the flattened panel as a template, a new piece of sheet may be cut out and drilled. This operation can be performed by any reasonably skilled metal worker, and requires no special jigs or apparatus. All tail surfaces are of "shell" construction, the monoplane cantilever tail plane and the fin being built into the fuselage. Instead of an adjustable fin, a flap on the trailing edge of the rudder is used for trimming purposes. Similar flaps are fitted to the elevators and are operated by means of a lever in the pilot's cockpit. The provision of these small flaps eliminates the difficulty experienced in aircraft of this type in operating an adjustable tail plane at high speeds.
The retractable undercarriage is a novel type of construction. The gear is operated by rotary motion about a pivot, the interior operating mechanism being merely a worm drive. An electric motor drive is operated by the pilot by a switch, and this lowers the undercarriage in about seven seconds. Emergency manual control, suitable warning devices and a pointer in the cockpit indicating the position of the landing gear at all times, are provided. The gear itself is composed of a single cantilever duralumin strut of rectangular section, to the upper end of which is fastened a segment of a worm wheel. The lower end of this box-like strut contains an oleo shock absorber unit to which a stub axle is attached. To this strut is fastened an automatically operated fairing which completely closes the wheel well and renders the bottom surface of the wing perfectly flush when the gear is retracted. A single cable runs from a suitable point on the landing gear back through the fuselage to the tail wheel. This cable partially retracts the tail wheel, as the undercarriage itself is retracted.
A Wright "Cyclone" Model F.2 radial air-cooled engine, rated at 700 h.p. at 1,900 r.p.m., is mounted in the nose and enclosed in an N.A.C.A. cowling. A three-blade adjustable pitch metal airscrew is fitted. Fuel tankage for a range of 800 miles (1287,5 km), 123.2 gall. (560 litres), is provided in the centre section.
The pilot's compartment is immediately behind the engine, aft of the fireproof bulkhead, and is fitted with a Vee-type inward sloping windscreen. The pilot sits on the port side and a mail compartment of 20 cu. ft. (0,57 m2) capacity occupies the starboard side of the cockpit. A soundproof bulkhead fitted with a small door separates the pilot from the passenger compartment. The eight passengers are seated two abreast, separated by a 12 in. {304,8 mm) aisle and the cabin seats are adjustable to three positions. The fuselage is 62 in. (1574,8 mm) high and 52 in. (1320,8 mm) wide. Behind the last seat is the main cabin door, and opposite this door is a fully equipped lavatory. Immediately behind the lavatory is the passengers' baggage compartment, and to the rear of this is the main radio installation. Standard equipment of the aircraft includes full night-flying instruments and flares, and complete two-way wireless.

The riveted heads all over the exterior of the machine do, of course, detract to some extent from the performance., and it is intended that all riveting shall be replaced by spot welding just as soon as this method of construction is permitted by the authorities. Even now spot welding is used whenever possible, as, for example, for the doors and nearly all the non-stressed parts. The general adoption of this method will make the Vultee the cleanest aircraft imaginable. The wings are built up with the double-skin system common to most metal cantilever jobs where the inner skin is corrugated and the outer skin is flat, the two being riveted together. Alclad sheet is used throughout. With this system the skin takes its share of the stress and forms a rigid, stable structure with the comparatively light rib and spar system built between the top and bottom surfaces.
So much for the Vultee.
<...>

The fifth production V-1A (NC13768) delivered to American Airlines in the autumn of 1934.
The Lockheed Orion and Vultee V-1a were among the advanced single-engine low-wing designs that demonstrated the ability of the US aircraft industry to achieve good ratios of useful load to max take-off weight in the mid-thirties.

One of the seven ex-American Airlines V-1As originally acquired by the Spanish Republican government and four of which survived the Civil War to enter Nationalists service as illustrated.

TWENTY-ONE·YEAR OLDS. This Gerald Vultee designed and built eight-seat Model V-1A (with Panamanian letters HP158) dates from 1935/36 when, it is believed, it was owned by Hearst Publications Inc. (HC16099; construction number 25) and used as an executive transport.

The last production V-1A (NC16099) with the Panamanian registration (HP-158) as it appeared in the film "Jungle Queen".

A Vultee of American Airlines. The same type is also used by Bowen Air Lines from Brownsville to Fort Worth. This machine is probably the fastest on any scheduled air line in the world

The last production V-1A (NC16099). This aircraft, now the sole remaining example of its type and fully restored, illustrated as flying at the present.

A VULTEE IN ENGLAND: The demonstration Vultee, which has been sent over here by Mr. Cord, being flown last Monday by Mr. Lee Smith at Hanworth, where it is being housed. 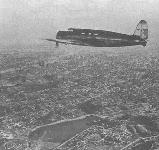 CRUISING AT 215 M.P.H.: The latest V1-A Vultee commercial machine flying above the clouds of Southern California.

CYCLONIC: Mr. Lee Smith and the demonstration Vultee which, with a Wright Cyclone F. engine of 750 h.p., has a maximum speed of 235 m.p.h. 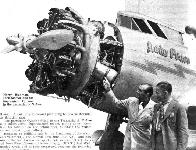 Harry Richman, Dick Merrill and the impressive Cyclone in the transatlantic Vultee. 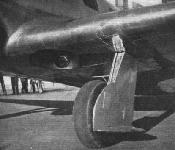 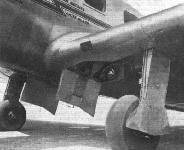 This view shows the Vultee's retractable undercarriage, with one of the wheel wells and automatically closing cover. Note also the concealed landing light and, on the leading edge, the indirect ventilation intake. 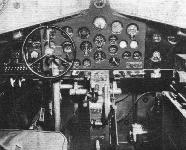 A MODERN "CONTROL ROOM": The cockpit of the single-engined Vultee V-1A, which cruises at 215 m.p.h. The usual instruments for normal and blind flying can be seen, as well as the airscrew pitch adjustment, and the flap and undercarriage retraction controls.