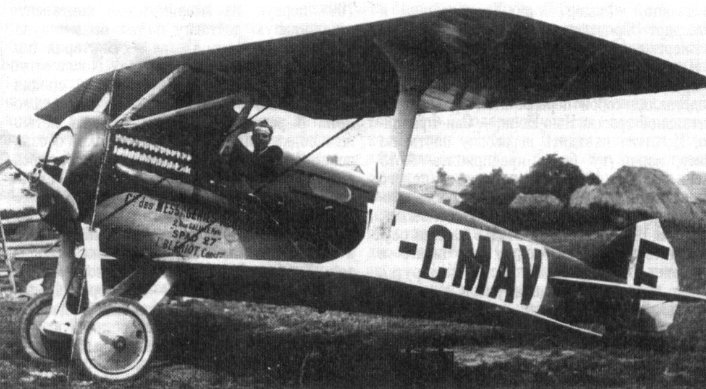 <...>
Three very interesting Spad machines are exhibited, interesting because, while retaining the characteristics of the Spads built during the War, they are, as regards two ДальшеMore>>> of them, designed for sporting purposes, having low-powered engines and consequently reasonable cost and upkeep. The third machine is a three-seater, with the two passengers seated inside an enclosed cabin.
<...>
The third Spad - the three-seater limousine - is a development of the military type S 20, and carries the series number S 27. Like the other two machines shown, it has the general Spad characteristics, although the enclosed body alters its appearance somewhat. The pilot is placed in front, while the two passengers are seated side by side inside the cabin, looking out on the country over which the machine is flying through windows in the "sides of the fuselage. The engine fitted is a 300 h.p. Hispano-Suiza, which gives the machine a maximum speed of 143 m.p.h. The landing speed is about 65 m.p.h. The machine has an overall length of 24 ft., and a span of 32 ft. The weight of the Type S 27 is 1,870 lbs. empty and 2,770 lbs. fully loaded (pilot, two passengers and three hours' fuel).

Although being exhibited on one stand, we have thought it best to deal with the Bleriot and Spad machines separately, since one has become accustomed to associate different designs with the two names. In addition to the large Bleriot “Mammouth," M. Bleriot exhibited three Spad biplanes, all more or less similar in general outline and bearing, in spite of their peaceful purpose, the aggressive look which one associated with the military Spads. It is somewhat difficult to define this appearance, but somehow the Spads always give one the impression of "being in a hurry to get there." This is probably due to their streamline monocoque bodies, and possibly also, to a certain extent, to the backswept top planes. Of the three machines exhibited, perhaps that which most resembles the military types is the Limousine, Type XXVII, with 300 h.p. Hispano-Suiza engine. In spite of the fact that the machine is a limousine, the fuselage is not of much greater cross-sectional area than were the military Spads. The consequence is that the space inside the cabin would be considered cramped by most British designers. As the fuselage is of approximately circular section, the best that could be done with the seats is to stagger them, and this is what has actually been done. The two seats are upholstered in blue velvet, while the woodwork is in polished mahogany, a combination which looks very well, and the cabin, putting aside for the moment the lack of space, looks very cosy and inviting. The pilot occupies his usual position in the cutout portion of the centre section, and, in view of the fact that the passengers are behind him, one appreciates the need for a back-swept top plane.
Although the Type 27 is a three-seater, the wing area is quite small, and the loading must be comparatively heavy. There is only one I-strut on each side, but the wing-bracing, which is in the form of streamline wire, runs from both spars, as in a machine with a pair of struts on each side. The end attachments of the struts is covered by an aluminium casing.
A feature of this, as well as of the remaining two Spad machines exhibited, is that ailerons are fitted to the bottom plane only. This, by the way, is an arrangement which appears to be coming into favour with French designers. Whether the object is an aero-dynamical one, or whether the raison d'etre is a practical one is not known, but the probabilities are that it is the latter. By fitting the ailerons on the bottom plane the control system is simplified, and, moreover, the ailerons themselves and their attachments are within easy reach. In the Spad 27 they are not balanced, as the machine is comparatively small.

The Spad type S.27, Limousine: Although having an enclosed cabin for the passengers, this machine has retained its streamline monocoque fuselage

"Spad 27," the Messageries Aeriennes Co.'s 'bus piloted by Lieut. Jean Casale, which brought over mails from Paris on Thursday last week. Inset, Lieut. Casale taking off at Hounslow on Friday for Paris

PARIS-LONDON-PARIS RACE: Centre, the Spad, piloted by Bourdon, just landed at Waddon aerodrome. On right, M. Bourdon has his papers signed by M. Rey, the French official, at Croydon. In this picture are Commander H. E. Perrin and Squadron-Leader T. O'B. Hubbard. On the left, M. Bourdon and his two passengers

SOME SPAD DETAILS: a sketch of the door of the Spad limousine