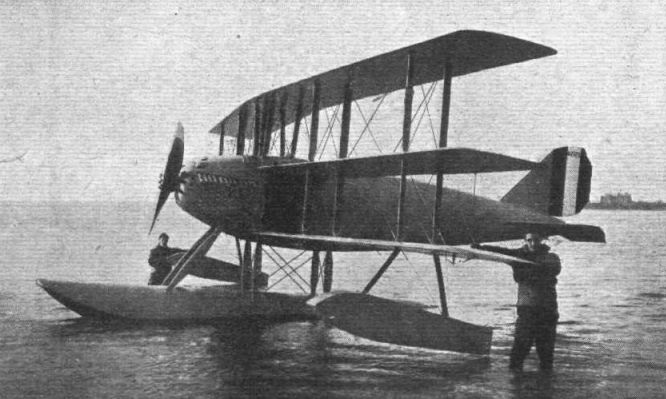 Curtiss 18-B and 18-T (USA)
Two-seat fighters produced too late to see action with the American forces during World War I. The USAAS received two 18-B biplanes and two 18-T triplanes, while the US Navy received two similar 18-Ts. All were powered by the 298 kW (400 hp) Kirkham K-12 engine.

The World's Fastest Hydroaeroplane: The Curtiss "Wasp," equipped with pontoons, which established a new world's record in recent Navy trials at Rockaway, L.I., by travelling at the rate of 138 miles per hour, piloted by Roland Rohlfs. It is the same machine in which he established new world's records for altitude and climb at Roosevelt Field last September. It is now the property of the U.S. Navy, and will be used at Hampton Roads, Va., for training purposes. The former world's hydroaeroplane record was 126 miles per hour, held by the Curtiss HA hydro. The equipment of the "Wasp" was the Curtiss 12-cylinder 400 h.p. motor

Having examined a Bristol F.2B two-seat fighter, the Curtiss Aeroplane & Motor Co of Buffalo, New York, developed an entirely new fighter powered by an equally new American engine. The result was the 1918 Curtiss 18T-1 Wasp triplane (a biplane 18B Hornet was also built), fitted with a 400 h.p. Kirkham K-12 engine. The US Navy received two, as did the Army. This is Navy 18T-1 A3325, also used for Army testing.