POWER FROM BROUGH. The V.E.F. J.-11, a light Latvian private-owner type built round one of the new Cirrus Minor engines. The speed figures quoted are 124 m.p.h. cruising and 149 m.p.h. maximum, which, for 90 h.p. and two up is good going in any language. The mounting of the tail plane is one outlandish feature to note. It appears that the occupant of the front seat has quite an extraordinarily good prospect.
CIRRUS-MINOR-ENGINED, this Latvian V.E.F. J-11 monoplane recently made a circuit of its native country in 5 hrs. 20 mins. for the 655 miles, including several demonstration stops; the average flying speed was 125 m.p.h. The machine is shortly coming to England, and those interested in demonstrations should write to Mr. Janis Vitols, 24, Queensborough Terrace, London, W.2.

The fascinating little Latvian V.E.F. 12 which was judged the smartest machine on parade.

The clean lines of the V.E.F. are obvious in this photograph, taken during the Isle of Man races. The ailerons do not, as they appear, extend from centre section to wing tip - the inner portions are slotted flaps.

An untouched photograph taken by Flight with the miniature camera. It shows the V.E.F. J12 cabin monoplane at Ronaldsway, Isle of Man.

The two leading machines, the Klemm in the foreground and the V.E.F. on the left. Two of the four Gauntlets at the meeting may be distinguished in the background.

ECONOMICAL SPEED: The Valsts Elektrotechniska Fabrika J.12, for which Rollasons of Croydon are agents in this country. With an 80/90 Cirrus Minor engine this little two-seater cruises at 123 m.p.h. and has a maximum of 149 m.p.h. One or two minor modifications are being made to the later production machines in order to bring them into line with British C. of A. requirements. Among other interesting features the J.12 has manually applied split flaps and differentially operated slotted ailerons. 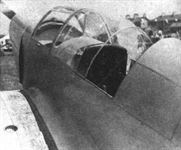 The transparent enclosure arrangement on the J.12. The rear portion slides and can be left in any position, while that over the front seat lifts. There is a wide luggage locker behind the rear seat.

THE ILL WIND: A corner of Rollason's hangar at Croydon. In the foreground is a Stinson Reliant, with the little Latvian V.E.F. J.12 behind it and the South African Junkers Junior on the right. One of I.A.F.'s Curtiss Condor freighters can be seen in the far distance.

Almost ready. An excellent photo showing the I-16 nearing completion. Many structural details are readily apparent. A VEF I-12 is in the foreground.
I-17

The V.E.F. I-17 basic trainer.
Aircraft designed in Latvia by Karlis Irbitis are numerous, ranging up to the sporty-looking I-17 trainer. 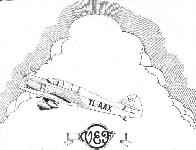