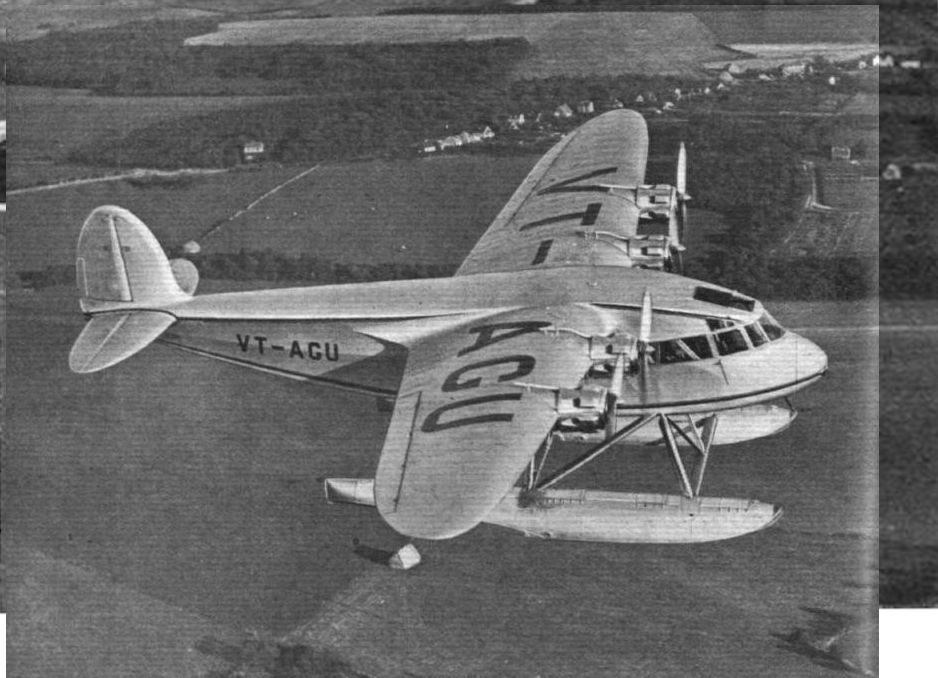 THE SHORT SCION SENIOR
Comfort for Passengers and Economy in Operation the Main Features of New Four-engined Type: Ample Reserve in Spite of Low Power

SHORT BROTHERS' LATEST: The Scion Senior carries up to ten passengers at a maximum speed of 134 m.p.h. although its four Pobjoy Niagara engines develop a total of only 360 b.h.p. The next machine to be built will have a wheel undercarriage.

OUTSTANDING CIVIL TYPE: This small commercial type, the Short Scion Senior with 90 h.p. Pobjoy Niagara engines, was produced in 1935. It has seating accommodation for ten passengers.

With four Pobjoy Niagara engines of 90 h.p. each the Short Scion Senior carries up to ten passengers. The machine is available both as a landplane and as a seaplane.

The Short Scion Senior at her moorings in the Medway, off the works of Short Brothers.

The seaplane version of the unique Short Scion Senior has a maximum speed of 135 m.p.h.

Scion Senior VT-AGU on the Medway shortly before delivery to l.F.&A in Burma. Note the absence of the ventral fin, which was added at a later date.

VT-AHI on the slipway at Pazundaung. Much of the Rhodoia and Cellon transparent plastic glazing had to be replaced annually because of shrinkage. 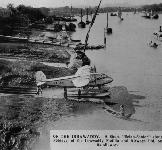 ON THE IRRAWADDY. - A Short "Scion Senior" (four Pobjoys) of the Irrawaddy Flotilla and Airways Ltd. on its slipway.

A motley assortment of river craft often caused pilots much anxiety. Note the addition of the ventral fin to VT-AHI.

The same aircraft disembarks passengers at the Pazundaung slipway. Not one of the six Scion Seniors built ever hurt a soul, although they had very varied and sometimes dramatic lives.

VT-AHI on the crowded apron of Short's boatyard by the Medway, shortly before disassembly for packing and export in September 1936.

VT-AHI takes off for its first flight in Burma on October 21, 1936, in the hands of Capt Esmonde. The name Karaweik was Burmese for “a ship of state.”

Eyed askance by a passing boatman, VT-AHI disembarks passengers at the Pazundaung slipway. Only minutes before, this sampanwallah had fled for his life as the great machine, after thundering about his ears, hurtled down to alight in the midst of the other, equally irate, men of the river.

Karaweik begins the long haul up the slipway to the not unmusical chant of four good men and true toiling away at the hangar winch.

A hundred hands made light work of transporting Scion components to the assembly point in I.F.&A’s hangar at Pazundaung, Rangoon, on October 8, 1936.

Fitting the wings to Scion Senior VT-AIJ in February 1937.

FOR THE IRRAWADDY FLOTILLA COMPANY: The first of the new Short Scion Seniors (four Pobjoy Niagaras) on the slipway at Rochester. The machine bears Australian registration letters.

Clean aerodynamic design endows the Short Scion Senior with a good performance in spite of the relatively low power (four Pobjoy Niagara engines of 90 h.p. each). The top centre photograph on this page affords an interesting comparison between ancient and modern transport on the Medway, at Rochester. 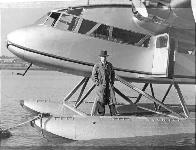 The shapely nose of the first Short Scion Senior. This machine has been sold to the Irrawaddy Flotilla Company for work in the east. Standing on one of the floats is Mr. J. Lankester Parker, Short's chief test pilot.
A splendid photograph of John Lankester Parker standing on the port float of the first Short Scion Senior, VT-AGU, moored in the Medway before its delivery to the Irrawaddy Flotilla Co in Rangoon in January 1936. Lankester Parker flew every Short prototype on its maiden flight until his retirement from test flying in 1945.

Capt E. Esmonde poses for the camera at the conclusion of his test flight to check unuseable fuel carried by Karaweik.

The sole Scion Senior landplane, G-AECU, on charter to the Iraq Petroleum Transport company in early 1939, taxies out prior to take-off from Sharjah, Trucial Oman.

The Short Scion Senior (four Pobjoy Niagaras) is shown as a landplane.

Four Pobjoy engines powered the Scion Senior which, like the Scion, was fitted with wheels or floats.
The new Short Scion Senior with four Pobjoy Niagara engines appeared at Hatfield for the first time as a landplane.

During the demonstrations: The Short Scion Senior over a section of the crowd

The hinged nose of the fuselage permits inspection of the flying controls, instruments and other equipment, and attracted a good deal of attention. 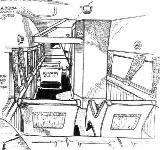 Details of the wing construction: The spar is in the form of a girder "box," in which the corner flanges are of extruded cruciform section and the bracing members are tubular. 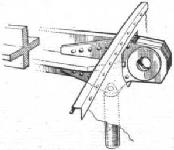 One of the joints which secure the outer wings to the centre-section.

The grouping, in the stern, of the elevator and rudder control leads is shown in the upper drawing. The sprockets and small pulleys are for the rudder and elevator "tab" controls. The lower diagram shows how these control leads are arranged.