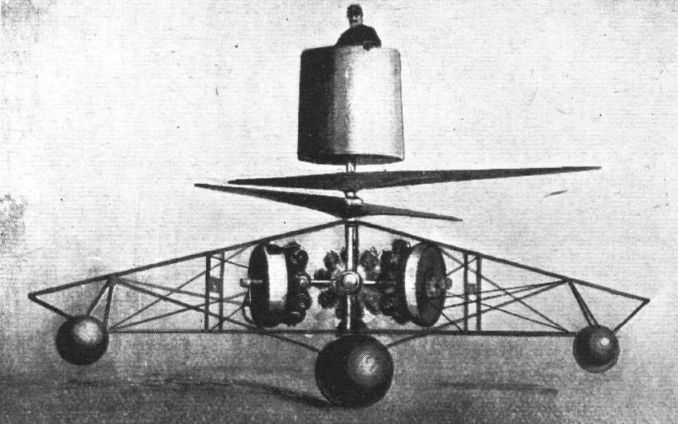 Flight, May 1921
TESTS MADE WITH CAPTIVE HELICOPTERS

TESTS MADE WITH CAPTIVE HELICOPTERS
By Professor KARMAN

Application of the Captive Helicopter

(a) Captive Helicopter with Crew, for Observation Purposes During War on Land. - The advantages of the captive helicopter as compared to captive balloons are as follows :- They are but slightly visible, and therefore provide limited target area for artillery; they are mounted with guns and axe specially adapted for shooting upward during attacks by aeroplanes; they are non-inflammable, they can be started without any loss of time and can be rapidly transferred from one place to another. The comparison may be continued by stating that :- A balloon-section on the south-west front, with one balloon, requires :- 1 automobile winch-wagon, 2 automobile gas-wagons, 3 freight wagons, 6 officers and 137 men, whereas a captive helicopter requires :-1 automobile with three trailers, 1 freight automobile, 6 officers and 20 men.
(b) Captive Helicopters for Observation from Battleships. - Adapted in a suitable manner, the captive helicopter might prove to be the best possible means of taking long-distance observations from battleships.
(c) Captive Helicopters for the Protection of Open Towns and Coasts from Aeroplane Raids. - A series of captive helicopters would not only be able to give warning of the approach of enemy aircraft, from a long distance, but might also be able to open effective defensive firing, if properly armed.
(d) Captive Helicopters without Crew for Radio Purposes. - Tests hitherto carried out with kite-balloons or antenna have always been unsuccessful either on account of a breakdown of the kite-apparatus at a low wind velocity, or because of disturbing motion of the balloon antenna during squalls. These difficulties would be avoided by the use of captive helicopters, and are therefore of particular utility for colonies and districts where stable mast-construction cannot easily be carried out, and which may also give rise to great outlay.
(e) Captive Helicopters for Meteorological Work. - By means of the captive helicopter, registering devices can easily be taken up and measurements carried out rapidly in all weathers.

The Petroczy-Karman Captive Helicopter: The spheres under the framework are pneumatic shock-absorbers. Each of the Le Rhone engines has its petrol tank mounted concentrically with it, so that the petrol system should be of the simplest. 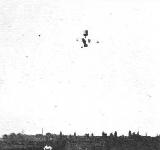 The Petroczy-Karman captive helicopter in the air.

THE PETROCZY-KARMAN HELICOPTER: Side elevation and perspective view of the machine as it appears from below.
<<   0/0   >>