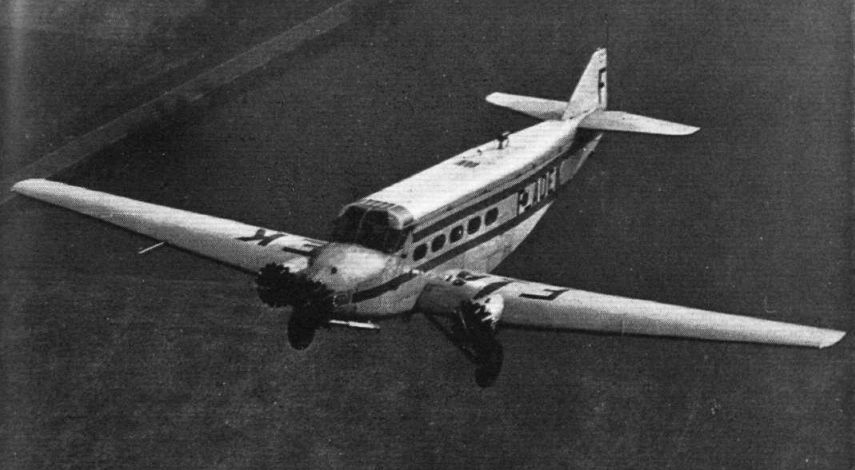 The machine shown by Michel Wibault is a large all-metal three-engined low-wing monoplane, not unlike a Junkers in general lay-out, but with flat metal plating instead of the corrugated covering which ДальшеMore>>> Junkers favours. In spite of its size, and the fact that it is fitted with three Gnome-Rhone "Titans" of 300-h.p. each, the Wibault carries but 10 passengers.
It will be recollected that hitherto Michel Wibault has used in most of his machines a form of wing construction in which the ribs projected through the metal wing covering, the latter being in panels with turned-up edges. The new machine, type 280 T 10, shows an entirely different form of wing construction. There are two main spars and a number of stringers. The ribs do not project through the covering, and the latter is riveted to the stringers in small flat panels. We had the pleasure of a short chat with M. Wibault himself on the stand and he informed us that quite a considerable increase in speed was obtained by the smooth wing covering, the upstanding edges of the covering in the older Wibault machines presumably disturbing the air flow to some extent. The fuselage, like the wings, is covered with smooth plates without the fore and aft corrugations which one has hitherto associated with Wibault machines.
When fitted with three Gnome-Rhone "Titans," the Wibault 280 T 10 has the following dimensions, weights, etc.: Length, 17 m. (55 ft. 9 in.); wing span, 22 m. 600 (74 ft. 2 in.); wing area, 63-5 m.3 (683 sq. ft.); tare weight, 3,555 kg. (7,820 lb.); gross weight, 5,750 kg. (12,650 lb.). The machine has not yet been flown, and performance figures are not, therefore, available.

AMONG the aircraft exhibited at the last Paris Aero Show was a three-engined commercial monoplane designed by M. Wibault. The machine was remarkable chiefly for the use of an absolutely smooth wing covering of light alloy, which was claimed to have resulted in a material increase in speed compared with the ribbed covering previously employed by M. Wibault on his machines. At the time of the Paris Show the new machine had not yet been thoroughly tested, but it has now been through the official tests of the Section Technique at Villacoublay, and some rather remarkable performances have been established.
The Wibault Penhoet 281 T.12 is an all-metal three-engined low-wing commercial monoplane, fitted with three Gnome-Rhone "Titan Major" engines, type K.7B., of 300 h.p. each. With fuel for a range of 600 miles, the machine carries pilot, wireless operator and 10 passengers, and 660 lb. of luggage. As a result of the official tests, the makers (Chantiers Aeronautiques Wibault-Penhoet, of 7, Rue Auber, Paris 9e) claim that the 28 T.12 is the fastest three-engined commercial aeroplane in the world. Whether that claim is justified is, perhaps, open to doubt, and some of the Ford three-engined models may be as fast or a little faster. But, at any rate, the Wibault-Penhoet certainly is fast, according to the Service Technique figures. For instance, near the ground the officially measured maximum speed, with the engines running at the normal power required for the 50 hours' type tests, is 148 m.p.h., while the cruising speed is 130 m.p.h.
The machine is claimed to be capable of flying on two engines at 9,000 ft., and on one engine at 1,300 ft.
According to Cidna requirements, a machine must clear a barrier 65 ft. high in a run of 600 yards from standing start. The 281 T.12 actually cleared 94 ft. The maximum time permitted by the Cidna regulations for reaching 360 metres (1,180 ft.) is 3 minutes. The 281 T.12 reached that height in 1 minute 59 seconds.
Following are the performance figures of the Wibault-Penhoet 281 T.12 issued by the French Air Ministry :-

The Wibault-Penhoet, another type used by Air-France.

THE "GOLDEN CLIPPER" AT CROYDON: The Wibault Penhoet of Air-France about to leave for Paris. Owing to a confusion in the rate of exchange in the "Gold Standard" it was stated in our issue of September 21 last that the "Golden Clipper" was a Loire et Olivier - of course, the latter class are "Golden Rays." Just a little Golden Slipper on our part!

THREE DAYS TO CHILE. Air France inaugurated its South Atlantic mail service last Saturday. On the picture is a scene at Croydon on Saturday, with the mail being loaded into a Wibault-Penhoet for the first stage.

One of the French commercial aircraft which were flown to Moscow to show the Russians what France can produce in this way. The Wibault-Penhoet 282T.

The Wibault 3-engined monoplane is characterised by a perfectly straight back. This is probably to avoid panel beating.

BROMMA IN ACTION: Transport machines of three nations at Stockholm's airport. On the ground are a British Continental Airways' D.H. 86 A and a Breguet-Wibault of Air France, while in the air is the Von Hindenburg, one of D.L.H.'s two Junkers G.38s, which have Jumo diesel engines.

This view of Croydon in 1938 shows British Airways' D.H.86A G-ADEC nearest the camera. This aircraft began life in 1935 with Hillmans Airways, and was absorbed into British Airways the following year. Shortly after this photograph was taken 'EC was sold to Uruguay as CX-AAH. The centre aircraft of the group is KLM's DC-2 PH-AKH, Haan, with Air France's three engined Wibault Penhoet F-AMHM in the background.

The D.333 F-ANQA Antares at Le Bourget. In the background is an Air France Wibault 283.

F-ANPI with Gnome-Rhone Mistral Major engines. These engines had opposite rotation, as can be seen from the propellers. In the background is the Wibault 282.T12 F-AMHM.
<<   0/0   >>