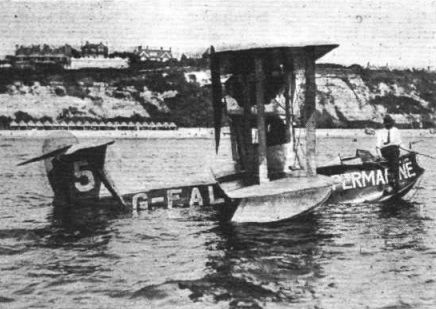 The "Sea-King" is a small single-seater fighting scout, fitted with a 160 h.p. Beardmore engine. In general design this machine is similar to the "Baby," and the Schneider Cup models of last year. The hull is practically of circular cross-section, with a V-bottom from stem to step, which is situated under the main planes. Between the first step and the stern a second step "grows" out of the hull. The pilot is seated well forward. Upper and lower planes are each in three sections, and the interplane struts, of which there are four pairs, slope outwards. The two innermost pairs are located at the centre sections, the lower one of which is of considerably smaller span than the upper; this lower section is supported on the hull by two pairs of struts, forming continuations of the centre-section interplane struts. The engine is mounted, in a streamline housing, midway between the planes on the lower centre section by six struts. The tail plane is of the monoplane inverted camber type, mounted on the top of a vertical fin above the stern of the hull. Wing-tip floats are mounted below the outer interplane struts. The speed range of the "Sea-King" is 51 to 96 knots (58-7 to 1105 m.p.h.).

The "Sea King" is very similar in general design to the Channel type, but is a small fast single-seater, capable of a speed of over 100 m.p.h. with a 160 h.p. Beardmore engine. The chief difference between the two boats, apart from size, is that the "Sea King" has a monoplane tail, and the rudder is extended down to the heel of the hull, forming a water rudder. This part of the rudder is covered with three-ply wood. As the machine is of such small overall dimensions, its wings are not made to fold as are those of the Channel type.

AT BOURNEMOUTH: THIS VIEW SHOWS THE ONE OF FOUR COMPETITORS IN THE 1919 CONTEST STARTING OFF THE PIER. HOBBS ON THE SUPERMARINE "SEA LION" FLYING-BOAT.

A SUPERMARINE SINGLE-SEATER FIGHTING SCOUT AMPHIBIAN: Three illustrations of the "Sea King, Mark I," fitted with 300 h.p. Hispano-Suiza engine. This machine is capable of all the usual tricks of a land aeroplane, being capable of being looped, rolled, spun, etc.

THE SUPERMARINE "SEA KING" TAXYING: Note the wheels lifted clear of the water.

One of the Schneider Cup defenders: The Supermarine "Sea Lion," with 450 h.p. Napier "Lion" engine, being got ready for her tests at the Southampton works of the Supermarine Company.

Captain Biard, the pilot, on board the Supermarine "Sea Lion III."

The 1923 Schneider Cup Contest: The British representative, which put up a good fight to retain the trophy. The Supermarine "Sea Lion III" (Napier "Lion"), piloted by Capt. Biard, taxi-ing slowly past I the Blackburn "Pellet."

THREE OF THE COMPETITORS ON SAUNDERS' SLIPWAY ON THE MORNING OF THE RACE: On the left, the Curtiss-Navy No. 3. In the centre, the Supermarine, and on the right, the C.A.M.S. 38

THE MOORING TEST: The six machines in line are, left to right, the Supermarine "SeaLion III," the two American Navy-Curtiss seaplanes, the C.A.M.S. flying boats, and the Latham twin-engined flying boat.

THE SCHNEIDER CUP RACE: Capt. Biard, on the Supermarine "Sea Lion III," gets away, just as the American Navy-Curtiss No. 4 (Rittenhouse) rounds the mark boats after finishing his first lap. Inset shows Capt. Biard turning.

THE SUPERMARINE "SEA KING": General arrangement and details of the retractable undercarriage.

THE SUPERMARINE "SEA KING": The pilot's back rest hinges down to form a step so as to facilitate reaching the starting handle of the engine. The starting magneto is housed in the fairing on the port side. On the starboard side is the petrol filler cap.

THE SUPERMARINE "SEA KING": The rear step is "ventilated" by a tube running through the hull. 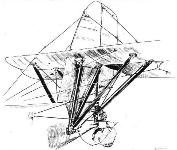 The very substantial combined tail skid and water rudder of the "Sea King."