New Rumanian club trainer is the RG-6, a tandem two-seater in the F.A.1. Class Ie sporting category. Power is a 75-h.p. Czech Praga D flat-four engine, giving a maximum speed of 106 m.p.h. Designer is Ing. Vladimir Novichi. An improved aerobatic version, the RG-7, is under construction . Main undercarriage legs of the RG-6 retract into the wing.

REGHIN RG-6. Early this year the Rumanian factory LFIL Reghin built a new type of a light sport and training machine, which is designated Rg-6. A team under leadership of W. Novitschi, who earlier designed some of the first post-war Rumanian gliders, i.e. Rg-1 and Rg-2, was responsible for the design of the machine, which today is in production for national aero clubs organisation called AVSAP. This two-seater cantilever low-wing machine of semi-monocoque wooden structure is powered by a 75-h.p. flat air-cooled Praga-D engine, driving a wooden propeller of fixed pitch. The wing is built of three sections and is of wooden structure throughout, except the control surfaces which are fabric covered as are the tailplane and fin control surfaces. The cockpits are arranged in tandem and possess separate canopies, which hinge to the starboard when opened. Complete dual controls are employed. The cantilever fixed undercarriage possesses oleo-pneumatic shock absorbers. A non-steerable tail-wheel is fitted. Two main fuel tanks are accommodated in the central section of the wing (8.4 gal.), with an additional container (1.98 gal.) housed in the fuselage.
Mr. Novitschi's team is enaged at present in the work on a further version called Rg-7, which will be used as an advanced trainer and aerobatic machine in the AVSAP. 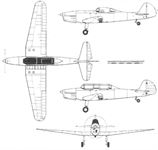