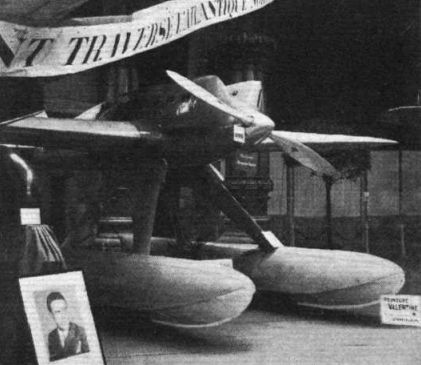 <...>
The second machine is a little high-speed twin-float seaplane, generally similar to our Schneider Trophy machines, and fitted with a 900-h.p. Hispano-Suiza engine. The monoplane wing is thickened ДальшеMore>>> considerably towards the wing roots, and it is presumably this fact which has led the designer to use streamline wires for bracing the wings downwards to the floats only. Of anti-lift wires there are none. This machine is known as the type H.V. 42, and a placard announces that its speed is 450 km./hr. (278 m.p.h.).
<...> 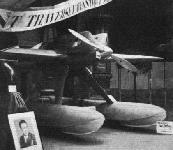 The Bernard H.V.42 is a high-speed seaplane of Schneider Trophy type.

The Bernard HV45 speed-trainer was used for training pilots taking part in the Schneider Trophy Races.
<<   0/0   >>