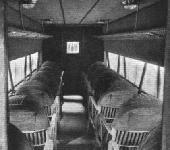 THE FOKKER F.10: View inside the passengers' cabin, which seats 12 passengers.