Curtiss HS-1L and HS-2L (USA)
Three-seat 298 kW (400 hp) Liberty-powered antisubmarine and patrol flying-boats of basically similar design, the HS-2L version having increased wing span and carrying heavier bombs. They became the subject of very large orders for the US Navy and were the only aircraft of indigenous design to serve with the Navy in Europe during World War I.

A VERY successful type of flying-boat for coastal patrol work was put into quantity production by the United States Navy during the War, the Curtiss Aeroplane and Motor Corporation and the Standard Aero Corporation turning out most of the machines between them. There are two models of this flying-boat, the HS-1L and the HS-2L, but the only difference between them is that the latter model is 12 ft. greater in span than the 1L, and has a larger rudder. Apart from this and minor details, therefore, both models are identical, so that the following description and illustrations of the HS-2L apply equally to the other model. The additional wing surface of the HS-2L is obtained by inserting a 6-ft. panel between each outer extension and the centre section. All the other parts - except, of course, the rudder - required to convert the 1L to the 2L are duplicates of other parts already on the former model, and the following is a list of the parts and alterations required in converting the 1L to 2L:- (1) Four 6-ft. panels, complete with hinges, and standard HS-1L wing-post fittings. (2) Upper centre section panel, with unrouted spars. [These are routed in the 1L.] (3) Front centre section lift wires changed from two 3/16-in. to two 1/4-in. non-flexible cable, and rear lift wires from two 3/16-in. to two 7/32-in. non-flexible cable. (4) Two 7-ft. front interplane struts 2 5/8 by 6 5/8 ins., and two 7-ft. rear 2 3/16 by 5 1/2 ins. (5) Four 1/8-in. stagger wires, with turnbuckles and end connections. (6) Larger size rudder, having 26.5 sq. ft. area instead of 19.6 sq. ft. (7) Aileron control cables lengthened.
The main planes, which have neither stagger nor sweepback, have the R.A.F. No. 6 wing section, and comprise a centre or engine section, the lower panels of which being divided by the hull and attached to small "sidewalk" panels built integral with the hull; 24 ft. outer extensions, which in the case of the L1 are mounted direct to the centre section; and, in the L2, 6 ft. intermediate sections. The centre section surfaces are "straight," but the outer sections are set at a dihedral angle of 2°. Balanced ailerons are fitted to both upper and lower planes, the upper ailerons having a maximum chord of 2 ft. 2 ins., and span of 17 ft. 8 1/2 ins., whilst the lower ones have a maximum chord of 1 ft. 10 ins. and a span of 12 ft. 9 ins. The main spars are spaced 4 ft. apart, the front spar being located 9 ins. from the leading edge. The fabric is sewn to the wings with the seams laid diagonally or normal to the leading edge. It is doped with two coats of cellulose acetate, two to four coats of cellulose nitrate, two coats of anti-actinic grey wing enamel on the top and vertical surfaces, and one coat of the latter on the under surfaces. All the strut fittings are of steel stampings and forgings, the main spars are of spruce, and the trailing edges of flattened steel tubing. The compression ribs are of solid pine, and the intermediate ribs of lightened pine. The tail is of the non-lifting type, mounted high up on the stern above the fin. The elevators are divided and unbalanced, whilst the rudder is balanced.
The hull is similar in form and construction to the other flying boats of the H-12 and F-5L type. It has an overall length of 34 ft. 5 ins., a width of 4 ft. for the main body and 8 ft. across the planing fins. The planking is of pine or cedar, made up of 3/16 -in. outer layer and 5/32-in. inner layer, with fabric in between. The frames, keel and stern post are of ash, whilst the keelson, deck stringers and floors are of pine or cedar. The chine stringers are also of pine, or Port Orford cedar, and the seam strips are Spanish cedar. The bulkheads are of three-ply waterproof veneer. The hull itself is finished with low visibility grey wing enamel, and all metal parts are enamelled.
The power plant consists of a single twelve-cylindered, low-compression Navy type Liberty, developing 330 h.p. at 1,700 r.p.m., and driving a four-bladed pusher screw. The engine is carried on laminated ash-spruce-ash bearers mounted above the hull on streamlined steel tubing, braced with non-flexible tension cables. The main fuel tanks, having a capacity of from n o to 125 galls., are located in the hull at the centre of gravity, a gravity tank of about 30 galls, capacity being mounted on the top plane centre-section.
Dual control is fitted, consisting of an inverted U ash frame equipped with two 16-in. hand-control (aileron) wheels. The rudder-bars are of ash, mounted on bronze blocks. The throttle and ignition levers are located in the cockpit, on a diagonal bridge between the two seats.
All bracing cables are galvanised, non-flexible. The centre-section and intermediate cables in the 1L are 3/16- in., the outer cables being 5/32 in. All flying cables are doubled The following is a general specification of the HS-1L, and, in.brackets, HS-2L :-

Rear view of A-2076, a HS-1L with revised centre-section. The insignia on the forward hull appears to be the ‘Hat-in-the-Ring’.

Curtiss seaplanes of a remarkable variety served the US Navy during the 1914-1918 War. Here a HS-1L leads a line-up which includes an MF flying-boat and N-9 floatplanes.

The Curtiss HS-1 was a conversion of the twin-engined H-14. The three-bladed propeller is not evident in this view.

The HS-1L was a typical rugged Curtiss product. This photograph, dated April 27, 1918, is probably of a training machine. Note the cylindrical over-wing gravity tank.

Curtiss built HS-1L A-2078 with improved centre-section, NAS Pensacola, September 1919. The aircraft is equipped to tow a banner for air-to-air gunnery. Note the winged ‘Ace of Spades’ insignia.

Curtiss HS-1L A-2097 of NAS Pensacola. Note the insignia of a winged figure riding a bomb

Close-up of Curtiss HS-1L A-1735 of NAS Pensacola. Note the ‘Hat-in-the-Ring’ insignia. It is not known if this preceded that used by the AEF in France.

NAS Pensacola, Florida, was one of the major users of the Curtiss HS-1L for training during the war years. Aircraft from three of the four squadrons which used the type at Pensacola are shown here.

Two Curtiss HS-1Ls with late centre-sections. Note the hull of a twin-engined flying-boat in the background

HS-1Ls lined-up on the apron at NAS Brest, France

HS-1L from NAS Pensacola painted up for Christmas. Markings indicate this as a postwar photograph.
HS-2L

Representative of the first aircraft acquired for forestry work is this Curtiss HS2L flying boat, powered by a 360 h.p. Liberty engine driving a four-blade pusher propeller.

The colours and nose markings of this HS-2L indicates that the photograph was taken postwar. It appears to be A-1147 which would imply an LWF-built example.

One of the original OPAS Curtiss HS-2Ls at Orient Bay. Timber baulks have been positioned to allow the Liberty engine to be removed for overhaul.

An Interesting Picture from America: A U.S. Navy Patrol Flying Boat releasing a Carrier Pigeon whilst in flight over the sea. The pigeon, just below the bow of the boat, is indicated by the arrow-head.

Davis Gun-equipped HS-2L. The Bureau Number appears to be A-1887. Note the Lewis Gun fitted for aiming.

AERIAL "OBLIQUE" PHOTOGRAPHS, ILLUSTRATING FOREST RECONNAISSANCE, TIMBER CRUISING AND FIRE PROTECTION AS CARRIED OUT BY SEAPLANE IN CANADA: 1. Distant view of forest and lake area; altitude 3,000 ft. Note point of land x. 2. Nearer view of point of land shown at x in 1; altitude 1,000 ft. 3. "Close-up" view of same area, showing actual timber types; altitude 200 ft. 4. A flying boat on patrol, as seen from another machine flying above it. 5. Landing supplies for fire fighters on a lake near the scene of the fire. 6. Comparison of the old and the new way. The former is illustrated in the photograph by the look-out tower at Norway House, Lake Winnipeg, photographed from the seaplane which provides the new way.

SEAPLANE FLYING IN CANADA: D.H. "Moth" seaplane, D.H.61 seaplane, and an old H.S.2Ls flying-boat at the Sioux look-out base of the Ontario Government Air Service. 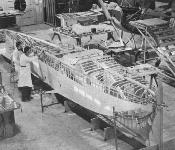 Gradually taking shape at Canada’s National Aeronautical Collection at Rockliffe, Ontario, is a Curtiss HS-2L flying boat of the type which pioneered forestry flights in Canada in 1919. The completed aircraft will be displayed alongside the remains of HS-2L G-CAAC “La Vigilance”.

Some details of the Hall all-metal wing built for H.S.3 flying boat.

HS-2L from NAS Miami having suffered a collapse of the horizontal tailplane after an Aeromarine seaplane hit its tail at about 200ft altitude. The crew were extremely lucky to escape. September 1918.