As briefly reported last week, test flights were recently carried out with a new commercial flying boat constructed by Saunders-Roe, Ltd., of Cowes. We are now able to give some brief particulars and illustrations of this machine, and in a future issue of FLIGHT we hope to describe it in greater detail.
The Saro "Windhover" - the machine in question - is the intermediate member of the Saro Amphibian family, i.e., the "Cutty Sark" and "Cloud," with which our readers are, no doubt, familiar. It is a metal-hull flying boat equipped with three D.H. "Gipsy II" engines, and accommodating six passengers. The "Windhover" was designed to meet the demand for a three-engined machine capable of carrying a good commercial pay load and, the smaller "Cutty Sark" having proved so successful, it was decided to adhere as closely as possible to that design.
The six passengers are located in a comfortable saloon which is spacious, light and airy, with a separate observation window provided for each person.
Although the machine is a standardised production structurally, allowances have been made to install any suitable engines, whilst the constructors are always prepared to arrange the interior to suit special requirements, and with this end in view, requests have been made to arrange these types of craft for military and naval purposes.
The machine illustrated - which is being supplied to Dominion Airways, Ltd., for operation in New Zealand - was launched at East Cowes on October 16, and tested on that and the following day. On October 22 it was flown to Felixstowe, the machine being in charge of Capt. Scott, Saro's experimental test and design-development pilot. This craft will fly strongly on any two of the three Gipsy II engines that are installed in the present machine, and directional control during taxying (with two outboard motors running slowly) is remarkably effective.
It may be added, in conclusion, that this machine is provided with terminal fittings, so that a retractable land chassis may be fitted when desired.

Originally built as a pure seaplane, the first Windhover undergoes inspection at Saro’s Solent Works (West Cowes) in 1930. Originally given the New Zealand registration ZK-ABW, the aircraft went to Australia instead, where it served Matthews Aviation as VH-UPB. Seen here without the auxiliary winglet above the engines later added to both Windhovers, ZK-ABW made its first flight on October 16, 1930.

THE MEANS. The Saro "Windhover" (three Gipsy II's) at anchor in Gibraltar harbour. Beyond her is a Dornier "Wal" which operates on the line Gibraltar to Genoa, meeting the New York mail boat on her outward trip and then remaining at Gibraltar until the incoming ship arrives.

Windhover G-ABJP while in service with Channel Islands Airways, the holding company for Jersey and Guernsey Airways. The aircraft inaugurated services between Guernsey’s St Peter Port and St Brelade’s Bay in Jersey in June 1935 (and to Alderney from August), the fare being set at 12s for a single journey and 18s return.

Only two Saro Windhovers were built, Jersey Airways acquiring the second, G-ABJP (c/n A.21/2) in May 1935 from the Hon Mrs Victor Bruce, who is seen here in the aircraft preparing for one of her several attempts on the world flight-refuelling endurance record in 1932.

The second Saro Windhover, G-ABJP, in the company’s East Cowes hangar in the early summer of 1931. Before being acquired by The Hon Mrs Victor Bruce, it was owned by millionaire Francis Francis, who sold it in September 1931 to Gibraltar Airways for use on its Gibraltar-Tangier service. 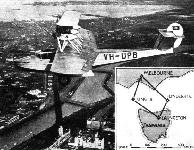 The Marconi A.D.18A equipment in the Morris 10 cwt. The long-wave receiver is on the left and the transmitter and short-wave receiver on the right.
<<   0/0   >>