THE THIRD KING'S CUP RACE, 1924: The Supermarine "Seagull" Amphibian flying boat, 450 h.p. Napier "Lion," two of which are entered in this year's race.

The latest Supermarine Amphibian Flying Boat, photographed during recent tests: In 1 the machine is seen just after getting off, and 2 shows her about to alight. In 3 she is flying over land, with the wheel undercarriage lowered. Note how wheels are lifted well clear of the water when flying over the sea.

A VISIT TO SOUTHAMPTON: Our photograph shows, from left to right, standing in front of a Supermarine "Seagull," with Napier "Lion" engine, Sir Warden Chilcott, M.P., Commander James Bird, General Bagnall-Wild, Director of Research, the Duke of Sutherland, Under-Secretary of State for Air, Air Vice-Marshal Vyvyan, and Mr. Hubert Scott-Paine.

THE R.A.F. AERIAL PAGEANT: Interesting machine which will make its first public appearance at the Pageant: The Supermarine "Seagull" (Napier "Lion" ) , an amphibian flying boat.

Supermarine "Seagull" (Napier "Lion"). The Supermarine "Seagull" is an amphibian-flying boat designed for fleet spotting and reconnaissance. The first of its type was produced in 1921, and it has passed through several series types. While the "Seagull" does not form the standard equipment of any of our home forces, a number are in service with the Royal Australian Air Force, and we have, therefore, included it amongst our resume of types. The "Seagull" has an excellent all-round performance, with a sufficiently low landing speed to allow of deck-landing. The landing wheels are of the retractable type, folding up under the wings.

"SEAGULLS" FOR AUSTRALIA: These four views show the Supermarine "Seagull," piloted by Captain Biard and carrying as passengers Sir Joseph Cook and Squadron-Leader Brown, taking off, in flight, alighting, and moored to a buoy. Two of these photographs give an indication of the poor visibility obtaining at the time of the flight.

SURVEYING THE GREAT BARRIER REEF: A composite photograph showing one of the Supermarine-Napier "Seagulls" alighting at Kennedy Sound.

SURVEYING THE GREAT BARRIER REEF: Supermarine-Napier "Seagulls" were used very successfully for this work. Our photograph shows one of the "Seagulls" alighting off Bowen

SURVEYING THE GREAT BARRIER REEF: Supermarine-Napier "Seagulls" were used very successfully for this work. Our photograph shows one of the "Seagulls" taxying up the beach on its wheel undercarriage, which proved very useful at low tide. 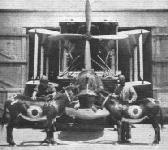 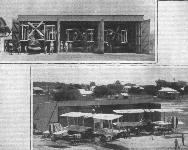 A SEAGULL'S NEST: The three Supermarine "Seagulls" housed in their hangar at Bowen. Below, two of them are seen on the tarmac.

LAUNCHING THE FIRST AUSTRALIAN "SEAGULL": The upper photograph shows the machine leaving the slipway at Woolston, piloted by Capt. Biard and carrying as passengers Sir Joseph Cook, High Commissioner of Australia, and Squadron-Leader Brown, Liaison Officer of the R.A.A.F. The lower photograph shows Sir Joseph having a final chat with Lady Cook before the start of the flight, and in inset Sir Joseph having his flying cap adjusted. 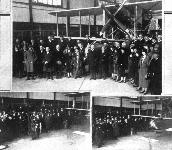 CHRISTENING THE FIRST AUSTRALIAN "SEAGULL": At Southampton the christening ceremony and launching of the first of a batch of Supermarine "Seagulls" built for Australia took place on February 6, when Lady Cook christened the machine and Sir Joseph Cook, High Commissioner for Australia, made a flight over the Itchen and Southampton Water. The upper group includes a number of well-known personalities present at the ceremony, and in the lower photographs Lady Cook is seen (on the left) cutting the cord, while on the right the bottle of champagne may be seen at the moment of striking the anchor secured to the bows of the "Seagull."

THE AIRCRAFT CARRIER IN AUSTRALIA: A Flight of Supermarine - Napier "Seagulls" of the Royal Australian Air Force flying over their Carrier, the "Albatross." 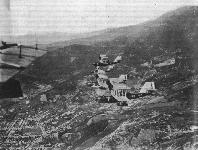 "SEAGULLS" IN TASMANIA: Our picture shows a fleet of Supermarine Napier ("Lion") "Seagull" amphibian flying-boats of the Royal Australian Air Force flying above Hobart, Tasmania, and gives some idea of the country which these machines have to fly over. 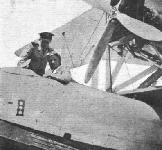 A Supermarine "Seagull" Amphibian, with Napier "Lion" Engine, at the Naval Base at Tokio: This photograph shows, standing up, Colonel the Master of Sempill, who was originally in charge of the British Aviation Mission to Japan, and, in the cockpit, Major Brackley, who took charge last year. Major Brackley is reported to have been on his way to England at the time of the terrible earthquake. All members of the British Aviation Mission are now reported to be safe.

VISITORS INSPECTING THE MACHINES AT CROYDON ON SATURDAY: The machines in the foreground are a Supermarine "Seagull," a Parnall "Plover," and an Avro "Aldershot," with 1,000 h.p. Napier "Cub."

One of three FAA Supermarine Seagull IIIs converted between 1928-9, G-EBXH worked along the south coast.