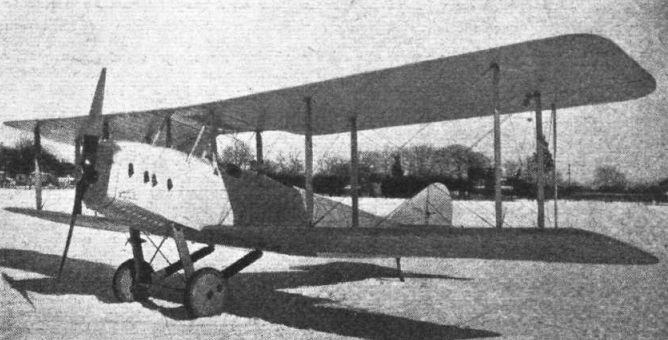 At present the company is completing the first of its commercial planes, the Type "F" tourist provided with a 150 h.p. Hispano-Suiza engine. This plane can travel a distance of 290 miles at the rate of about ДальшеMore>>> 90 m.p.h., carrying the pilot and three passengers. The side-by-side seating arrangement is comfortable and convenient. Dual controls in the rear cockpit enable a passenger to handle the machine, the pilot being able to resume control at any instant. For carrying mail or light express the Type "F" may be slightly modified to meet the requirements of such special services.

THE Type "F" is the first commercial design of the Ordnance Engineering Corporation, and when it was exhibited at the New York Aero Show in March, some doubt was expressed as to whether the 150 h.p. engine would be sufficient for a 4-passenger plane with side-by-side seating. It is stated that when the plane was first tested with pilot alone it was found to possess marked stability, quick climb and plenty of reserve power. Further tests were then made with one, two and three passengers, and in each case the same even stability and sensitive response to controls was observable. In one test with four aboard, and full fuel load, the plane rose from the ground after a run of about 200 ft. On another test with three aboard, the plane was flown at full speed parallel to the ground at a height of only a few feet, and although a gusty wind was blowing at about 25 miles an hour, the plane kept an even, straight course, necessitating practically no movement of controls.
There are no controls in the forward seat, and the two front passengers have ample room. In the rear cockpit the dual side-by-side controls allow either of the two occupants to handle the plane. Incidentally, this control arrangement is well suited for instruction, for the pilot is close to his pupil, who can see and hear just what the pilot does and says throughout the flight.
<...>
Since the foregoing was written some particulars have come to hand of a test made recently at Mitchel Field, Mineola, N.Y., recently. Piloted by Mr. Clarence Coombs, formerly chief test pilot at the U.S. Testing Aerodrome, it carried three other passengers to a height of 16,200 ft., which is claimed as a new world's record, although the performance does not appear to have been officially observed. It is stated that the climb occupied 1 hr 10 mins.
As a result of this test, the makers decided to put in hand a batch of twenty-five "Touristers," embodying one or two improvements on the first model. The chief difference will be the use of a 200 h.p. Hall-Scott "Liberty Six" motor, a type which has given very good results in the U.S. mail and army aeroplanes. It is felt that while the 150 h.p. engine has been found to give ample power for ordinary purposes, it will be an advantage to have the additional power available for flying in mountainous country, and also for improving the "take off," although it is claimed that the machine is already very good in this respect.
It has also been found possible to improve the accommodation of the machine which should add considerably to its prospects from a commercial point of view. The front and rear cockpits have been enlarged to permit more freedom to the passengers, while a door fitted to the front cockpit allows of easier access to the interior for the passengers. Another alteration, which, if it is not altogether an improvement certainly, adds to the attractiveness of the machine, is the employment of a mahogany veneer fuselage.

Two views of the Orenco Tourister in flight

THE ORENCO TOURISTER: The dual side-by-side aileron and elevator controls

THE ORENCO TOURISTER: The control leads from rear cockpit. Elevator cables at side; rudder cables, under seat

The Orenco Tourister: The petrol strainer under the floor of the rear cockpit

THE ORENCO TOURISTER: The engine mounting, showing the front steel engine plate, and the veneer bulkheads

THE ORENCO TOURISTER: On the left the aluminium fire-proof bulkhead separating the front cockpit from the engine. On the right the general arrangement of the tail skid shock-absorber system is seen, together with some details of the swivel mounting, etc.