IN our issue of July 13, 1922, we published illustrations and a description of the Udet sporting single-seater monoplane built by the Udet Aircraft Works of Munich. Since then, that firm has been experimenting with a development of the original experimental machine, and the result is that a two-seater, similar in general appearance to the first machine, has been developed to the point where the designers feel that they can standardise it for quantity production. This is now being done, and as the machine provides a very good example of what can be done with an engine of low power, we have thought that a brief reference to it may be of interest to readers of FLIGHT, more especially in view of the recent production by the Bristol Aeroplane Co. of the 18 h.p. "Cherub" engine described and illustrated in this issue.
From the accompanying scale drawings it will be seen that the Udet monoplane, in spite of the fact that it has a cantilever wing, is of high aspect ratio. This, coupled with the clean lines of the machine, is no doubt mainly responsible for the general efficiency, and although personally we are of the opinion that the wing loading is too high for a machine of this type, there is no doubt that the top speed is uncommonly good for such a low-power engine. The makers state that the maximum speed is about 150-155 km./hr. (93-96 m.p.h.). As the wing loading is about 9-5 lbs./sq. ft., the landing speed is probably high. No figures are supplied by the makers, but a rough estimate indicates that the minimum speed cannot be much less than 50 m.p.h. That in itself, is not a high figure for the ordinary aeroplane, but as a machine of this type is probably not intended to be used by experienced pilots only, a reduction in the landing speed of 10 m.p.h. or so would, we think, have done no harm. However, this is mainly a question of personal opinion, and if a good top speed is desired, a fairly high landing speed is unavoidable.
Constructionally, the Udet two-seater is similar to the single-seater, i.e., the fuselage is a flat-sided plywood-covered structure, while the wings are built up on two box spars having spruce flanges and three-ply sides. The choice of low wing position has doubtless been made mainly on account of a desire to keep the wing in one piece. With the wing placed above the fuselage this would have been difficult, as the placing of the cockpits would interfere with the attachment of the rear spar. Aerodynamically, this wing position is generally thought to be slightly inferior to the parasol or wing-on-top-of-the-body type: There is no doubt, however, that both structurally and as regards good visibility for the pilot, the present arrangement has much to recommend it. Another advantage of the low wing is that it becomes easier, without going to a very wide wheel track, to provide against the machine turning over on to its side. In the case of the Udet it is stated that the machine can heel over until a wing tip touches, and the only result is that the wing throws it on to its undercarriage without damage to the wing itself.
The attachment of the wing to the fuselage is interesting, and is somewhat similar to that employed by Fokker in the case of some of his biplanes and triplanes, i.e., the spars rest in a cut-out portion and are located by four bolts. As the longitudinal members of the fuselage rest direct on the wing spars, the four bolts do not have to support the load, as would be the case were the wing placed above, but merely to serve to locate the wing.
In order to remove the wing the fuselage is placed on two trestles. The rear undercarriage struts are detached, and the undercarriage swung forward, when the four wing bolts can be got at and the plane dropped out of its notch. For purposes of transport, the wing is placed above the fuselage on two special trestles provided for the purpose.
The two-cylinder Haacke engine is neatly mounted in the nose of the machine, and is cowled-in all but the outer portion of the cylinders. The petrol tank is placed between the pilot and the fireproof engine bulkhead, and it is stated that there is sufficient "head" to provide direct gravity feed. Incidentally, if we may offer a small criticism of the Bristol "Cherub," it would appear that a better placing of the carburettor might have been below the engine instead of on top of it. In this way gravity feed would have been facilitated. However, if found desirable, this little alteration can probably be easily made. The normal speed of the Haacke engine is 1,400 r.p.m., but the Udet will fly level with the engine throttled down to about 950 r.p.m. The machine is said to be very manoeuvrable, without being too sensitive on the controls, and we understand that it has been found particularly easy to fly, pilots who have not flown since the War having tried it and found no difficulty at all in handling it. The run required for getting off is given as 45 meters (about 50 yards), and the landing run is about 40 yards, the undercarriage being rather high and affording a large angle of incidence when the tail is on the ground.
The main particulars of the Udet two-seater sporting monoplane are as follows: Length, o.a., 5-53 m. (18 ft. 2 ins.); span, 8-9 m. (29 ft. 2 ins.); height, 2-1 m. (6 ft. 10 ins.); wing area, 8-8 sq. m. (95 sq. ft.); weight empty, 230 kgs. (506 lbs.); useful load, 400 lbs.; total loaded weight, 906 lbs.; wing; loading, 9-5 lbs./sq. ft.; power loading, 26 lbs./h.p.; maximum speed, 150 km. (93 miles) per hour; climb to 1,000 m. (3,300 ft.) in 8 mins.; normal range, 500 km. (310 miles). 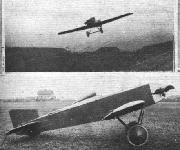 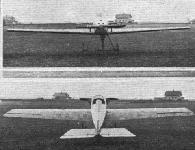 The Udet Sporting Single-seater: View of the wing in skeleton.