THE SAYERS, COURTNEY AND WRIGHT MONOPLANE
Constructed by the Central Aircraft Company

ALTHOUGH resembling in outward appearance the famous Hannover "Vampyr," the monoplane designed by Capt. W. H. Sayers, in collaboration with Mr. F. ДальшеMore>>> Courtney and Maj. Wright, and built by the Central Aircraft Company, of Kilburn, differs from the German machine in many respects, notably in the matter of detail construction. Aerodynamically also the "S.C.W." shows characteristics which are at variance with those of the "Vampyr." For one thing, the wing section employed is quite different from the Gottingen No. 441, which the Hannover machine is said to possess. In the "S.C.W." monoplane glider, the section is one of the airscrew sections, T.62, we believe; that is to say, in so far as one can speak of any particular section in a wing which tapers in thickness and chord from root to tip. What Capt. Sayers has actually done is, we believe, to step up the ordinates of the original section over the central portion of the wing, gradually thinning it down until the actual section is attained some distance out along the span, and thence the ordinates are progressively reduced towards the tip.
Another respect in which the "S.C.W." monoplane differs from the "Vampyr" is in the aspect ratio, the chord being considerably greater in the former machine, and consequently the aspect ratio smaller. How this change will affect the characteristics of the machine remains to be seen.
As already mentioned, the construction of the "S.C.W." monoplane is quite different from that of the "Vampyr." The fuselage, which in external shape greatly resembles the Hannover monoplane, is built up entirely without wire bracing, and, except for the wing spar fittings, without metal fittings of any kind. The four spruce longerons are 3/4 in. square in the forward portion, tapering to about 5/8-in. square at the stern. The struts are of similar dimensions, and of the same material, and rigidity is obtained by diagonal spruce struts secured to the longerons and vertical struts by three-ply wood "fish-plates," screwed to longerons and struts.
Where local considerations demand it, the transverse panels in the fuselage are built up in the form of a "diamond" enclosed in a rectangle and having its corners attached to the centre of the sides of the rectangle. The covering is fabric, except where local stresses are likely to occur, such as near the tail and over the bottom of the front portion, where three-ply covering is used.
The wing is built up in two halves, joined on the centre line by forked fittings (steel) of the form shown in one of the sketches. The spars are of built-up construction, with 3/8-in. three-ply webs and double flanges of spruce, screwed, through the three-ply, to one another. Over the inner portion the spars are reinforced by packing pieces of spruce, which bring the I section up to a rectangular one.
The ribs are of very light and neat construction, which is well illustrated in one of our sketches. The light flanges are of 1/4-in. square spruce, and the webs are formed by a Warren truss consisting of double strips. Finally, over the outside of flanges and the ends of the web strips are tacked narrow capping strips of thin three-ply wood. The leading edge of the wing is covered with a sheet of thin three-ply, extending from the leading edge strip up to the top of the front spar. The three-ply capping strips, to which reference has been made, stop at the edge of the nose covering sheet, thus forming a smooth surface. It should be pointed out that the rear edge of the three-ply sheet is screwed and tacked to a strip secured to the top face of the spar, so that it is supported right along and not at the ribs only.
The attachment of the wings to the fuselage is by very substantial fittings, forked over the upper longerons and having lateral grooves in them for the spars. By undoing a few bolts, the wing can be dismantled, either in one piece, or, by undoing the tubular bolts of the spar root fittings, in two halves. These bolts are in the form of short tubes of fairly large diameter, so as to give large bearing area, and are simply secured by a washer and split-pin.
The undercarriage is in the form of two skids, hinged at their front ends to the lower longerons, and so housed in the rear fitting as to be free to slide in a fore and aft direction as the load on the skids causes these to deflect.
Lateral control is roughly by ailerons, of triangular shape, and the controls are of the usual type, with the exception that elbow cranks and pull-and-push rods take the place of cables running over pulleys.
The general design appears to be very good, and the workmanship, as was to be expected from the Central Aircraft Company, is excellent. It seems probable that, if the machine performs well in the competition, the C.A.C. may standardize it and place it on the market at a reasonable figure.

Sketch of the S.C.W. (Sayers) Glider in flight. 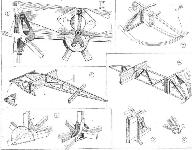 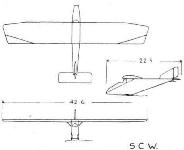