<...>
If the single example of "Swedish" design and construction shown by the Naval Aircraft Works possessed but little interest, the same cannot be said of the ДальшеMore>>> three machines exhibited by Harens Flygvapens Flygverkstader of Malmslatt. If these machines still bear traces of German influence in design, they do, at least, indicate individual thought on the part of the designers, and an attempt has quite obviously been made to break away from the stereotyped, and to evolve new features. This applies particularly to the monoplane, the type J.23, which is a strut-braced parasol monoplane, possessing such modern features as streamline fuselage and thick wings tapered off to the tips and centre as in the latest British monoplanes, such as the Bristol and Hawker machines. It was difficult to determine with any degree of accuracy the wing section used, but at the point of greatest depth, i.e. where the bracing struts were attached, the section appeared to resemble one of the Gottingen, or Joukowsky, aerofoils.
A remarkable feature of the J.23, shared by the larger biplane, was the slotted ailerons, which, although possibly infringing the Handley Page patent, differed from the H.P. slotted ailerons as we know them by the fact that as the aileron was moved up or down the size of the slot did not change. While experiments in this country have shown the slotted ailerons to be very effective, it may be doubted whether the ailerons on the Swedish J.23 are of sufficient area. From one of the accompanying sketches it will be seen that the shape of the ailerons on the J.23 are of approximately triangular plan form, and as the length of each aileron cannot be much more than 3 ft. the area is quite small. Similar remarks apply to the rudder of almost all Swedish machines, which appear to be ridiculously small according to British standards. Reference was made in our Editorial Comments last week to this fact, and it was not surprising to learn, from one with practical experience of Swedish naval and military aviation, that spins frequently occur, and, unfortunately, often with serious results. While the small control surfaces may be, and probably are, sufficient at high speeds, it is inconceivable that they can have sufficient power at or near the stalling speed. Consequently it would seem probable that pilots are not able to make use of the lowest speeds at which the machines are capable of flying.
The fuselage of the J.23 is of elliptical cross section, and is constructed of three-ply panels over a light framework of stringers and formers. A specimen of such a fuselage was exhibited in the scientific section, and the workmanship of this was of a very high order of excellence.
No figures relating to wing area were available, but the following performance figures are of interest, and indicate that the machine must be of more than ordinary efficiency to attain the speeds claimed for it, bearing in mind that the engine is a B.M.W. rated at 185 h.p. only. This engine is of the high-compression type, and maintains its power up to considerable altitudes, but the performance, if really attained, is one nevertheless of which the designers have good cause to be proud.
The weight of the J.23 is 760 kg. (1,670 lbs.) empty and 980 kg. (2,160 lbs.) loaded. The speed at 1,000 m. (3,280 ft.) is stated to be 220 km. (136.4 m.p.h.), and at 3,000 m. (10,000 ft.) 250 km. (155 m.p.h.). The ceiling is given as 8,000 m. (26,300 ft.). The machine is armed with two synchronised machine guns, the sights for which are of very elementary type, placed on each side so that the pilot can sight from either side.
<...>

The J 23 proved to possess too weak a structure and all examples of this type were rapidly withdrawn from service.

AT GOTHENBURG: Some of the Swedish machines: The monoplane single-seater fighter, J.23, which has a 185 h.p. B.M.W. engine. 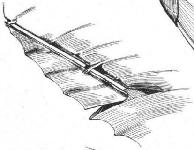 AT GOTHENBURG: Some Swedish constructional details. The very small slotted aileron of the J.23.